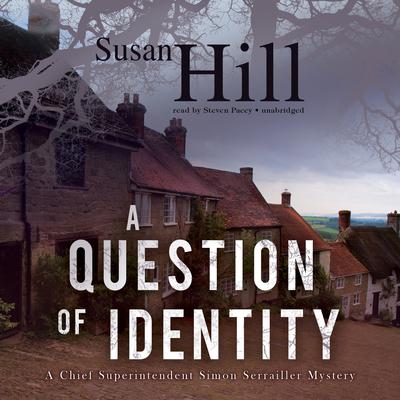 A Question of Identity: A Chief Superintendent Simon Serrailler Mystery

The particularly unpleasant murder of a very old woman in a housing project rocks the town of Lafferton. The murderer has left a distinctive "sign" on the body and at the scene of the crime. A couple of weeks later, a similar murder occurs, and a month or so later, so does another.

Initial investigations reveal that the mysterious "sign" was the calling card of a suspect who was charged with several murders in the northwest of the country, tried but acquitted on the grounds of insufficient evidence. All indications suggest that this person has simply vanished—or is he right under their noses? Simon Serrailler is obliged to delve deeper and scratch out answers in this addictive mystery of surpassing darkness by the bestselling Susan Hill.

“Like all the best crime writers Hill is far more interested in writing than she is in crime. What fascination she has for crooks and crackpots is no more (and no less) than the novelist’s fascination for character…But what you know about human nature is simultaneously being enlarged and improved upon thanks to Hill’s almost Shakespearean insights into what it is to be alive.” —Daily Express (London)
“The title of this, the seventh in the Simon Serrailler mysteries, gives a hint at the complexities of identity. In the novel, identity is something police and prosecutors must establish to link person and scene of the crime…The novel is spiked with the killer’s musings, which heighten tension and illuminate a very dark space. Very spooky, tick-tock suspense.” —Booklist

Susan Hill, the author of novels and short stories that have won the Whitbread, Somerset Maugham, and John Llewellyn Rhys awards, the Yorkshire Post Book of the Year, and been shortlisted for the Man Booker Prize. Her famous ghost story, The Woman in Black, has been a play on London’s West End and is the basis for a major feature film starring Daniel Radcliffe. Her crime novels featuring DCS Simon Serrailler are currently being adapted for TV. She has been a monthly columnist for the London Daily Telegraph. She has also written several nonfiction books and books for children, with Can It Be True? winning the Smarties Prize.