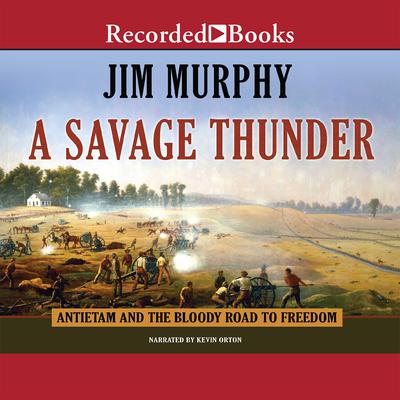 A Savage Thunder: Antietam and the Bloody Road to Freedom

A two-time Newbery Honor Book author, Jim Murphy is among the world's finest writers of nonfiction for children. In A Savage Thunder he takes listeners back to the American Civil War to tell the terrible yet extraordinary story of the Battle of Antietam. With the entire world watching, two armies met in Maryland in 1862. The Union needed a victory. The Confederacy hoped to continue its success. When the smoke cleared, 23,000 men were dead or wounded-and the momentum had shifted to the Union.

“Kevin Orton lends even-handed authority to the gripping account with a voice that would suit a major network news anchor—only with more passion. Orton seems to be gripped by the unrelenting action in his narration, and he passes on that ‘you are there’ feeling to readers.” —AudioFile
“In a logical, accessible way, Murphy discusses the battle both in detail and in a broader context, making a good case that it changed the course of the Civil War…A stirring, well-researched addition to Civil War shelves.” —Booklist (starred review)
“Orton’s masterful reading provides a ‘you are there’ intensity that recalls newsreel war reporting…Orton’s ever-changing speech rhythms, force of delivery, and shifting tempos, which match the intensity of the text, are most arresting, helping to turn nonfiction into moving historical truth.” —Booklist (audio review)
“Murphy provides readers with a lucid and compelling narrative, drawn mainly from firsthand accounts…The unflinching prose compels readers forward in anticipation of the events yet to unfold. Ever-present throughout the narrative is the dichotomy in leadership styles between the two generals…An outstanding account.” —School Library Journal
“What makes this impassioned volume speak—literally—are the many primary-source quotations of those involved, from the least to the most. The author deftly develops his characters, most notably the stubborn, vainglorious McClellan…Grand.” —Kirkus Reviews (starred review)
“In-depth…Come[s] alive for young and old readers a like.” —Children’s Literature