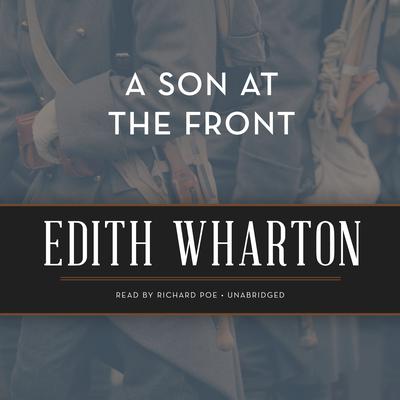 A Son at the Front

Wharton’s antiwar masterpiece probes the devastation of World War I on the home front.

Inspired by a young man Edith Wharton met during her war relief work in France, A Son at the Front opens in Paris on July 30, 1914, as Europe totters on the brink of war. Expatriate American painter John Campton—whose only son, George, having been born in Paris, must report for duty in the French army—struggles to keep his son away from the front while grappling with the moral implications of his actions.

Interweaving her own experiences of the Great War with themes of parental and filial love, art and self-sacrifice, national loyalties and class privilege, A Son at the Front is a poignant meditation on art and possession, fidelity and responsibility in which Wharton tells an intimate and captivating story of war behind the lines.

“An extraordinarily poignant novel…Wharton movingly portrays those left behind during war—not the wives and children but the devastated parents, who are forced to go on living at the cost of their own flesh and blood. Heartrending, tragic, powerful, this is not to be missed.” —Publishers Weekly
“Richard Poe articulately narrates a moving story of parents struggling to deal with their son’s departure for WWI…Poe portrays Campton as a gruff, stubborn artist; this overarching characterization nicely contrasts with the moments when his intense emotion for his son breaks through. Poe’s portrayal of young George in a youthful, cheerful cadence also provides contrast. Wharton’s story artfully puts the listener in Campton’s shoes, and Poe’s attentive narration and faithful vocalizations make this audiobook an absorbing listening experience.” —AudioFile