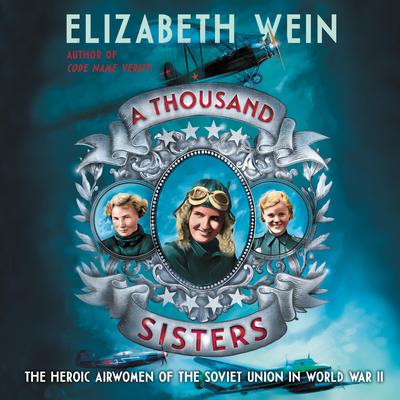 A Thousand Sisters: The Heroic Airwomen of the Soviet Union in World War II

The gripping true story of the only women to fly in combat in World War II—from Elizabeth Wein, award-winning author of Code Name Verity

In the early years of World War II, Josef Stalin issued an order that made the Soviet Union the first country in the world to allow female pilots to fly in combat. Led by Marina Raskova, these three regiments, including the 588th Night Bomber Regiment—nicknamed the “night witches”—faced intense pressure and obstacles both in the sky and on the ground. Some of these young women perished in flames. Many of them were in their teens when they went to war.

This is the story of Raskova’s three regiments, women who enlisted and were deployed on the front lines of battle as navigators, pilots, and mechanics. It is the story of a thousand young women who wanted to take flight to defend their country, and the woman who brought them together in the sky.

Packed with black-and-white photographs, fascinating sidebars, and thoroughly researched details, A Thousand Sisters is the inspiring true story of a group of women who set out to change the world, and the sisterhood they formed even amid the destruction of war.

“The powerful tale of the all-female Soviet air regiments who flew 24,000 missions to help defeat the Nazis.” —New York Times Book Review
“An intimate look at the pilots’ lives, both personal and military, as they work to defeat the Nazis…Richly detailed.” —School Library Journal (starred review)
“Readers will be impressed by {Wein’s] clear, casual style and her affecting introduction to these courageous, determined pilots, mechanics, and navigators.” —Publishers Weekly (starred review)
“Thrilling stories packed with lively detail, and the fascinating topic, still relatively unknown, should lure a broad range of readers.” —Booklist
“[A] complex and inspiring story…this important book soars.” —Kirkus Reviews
“What a writer! And an historian, too! Told through the superbly researched, powerful and poignant stories of the women involved, Elizabeth Wein gives due to the Soviet Union’s valiant women flyers of World War II.” —Candace Fleming, award-winning author of The Family Romanov

Elizabeth Wein is the author of several books, including Code Name Verity, winner of the Edgar Award in the Young Adult category and a Printz Medal Honor Book; Rose Under Fire, winner of the Schneider Family Book Award; and Black Dove, White Raven, winner of the Children’s Africana Book Award.