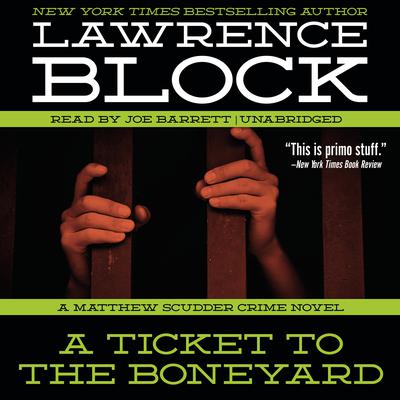 A Ticket to the Boneyard: A Matthew Scudder Crime Novel

Twelve years ago Matthew Scudder lied to a jury to put James Leo Motley behind bars. Now the ingenious psychopath is free, and the alcoholic ex-cop turned private investigator must pay dearly for his sins. Friends and former lovers—even strangers unfortunate enough to share Scudder's name—are turning up dead because a vengeful maniac is determined not to rest until he's driven his nemesis back to the bottle … and then to the boneyard.

“The murders are as savage as they come, their horrific nature intensified by the clarity of Mr. Block’s pristine prose…Block has a fine nose for the pungencies of New York’s after-dark street life, and he gives his hero wonderful opportunities to swap syllables with the city’s most articulate riffraff.” —New York Times
“Terrifying…[Block] creates suspense almost unbearable in intensity…Lawrence Block is one of America’s best crime writers, and he has never been better.” —San Diego Union-Tribune
“A smooth, chilling suspense novel that stretches nerves wire-tight.” —Boston Herald
“Exceptionally gripping…More thriller than mystery, and a powerful one…This sensitive and entertaining case is the series’ richest since Eight Million Ways to Die—a must for Block/Scudder fans.” —Kirkus Reviews (starred review)
“This is as near perfect as a private-eye thriller can get…The New York settings are superbly authentic, the dialogue is hip, sometimes touching but never mawkish, and the resolution—after Scudder’s old cop buddies decline involvement in what looks too much like a personal vendetta—is hair-raising.” —Publishers Weekly