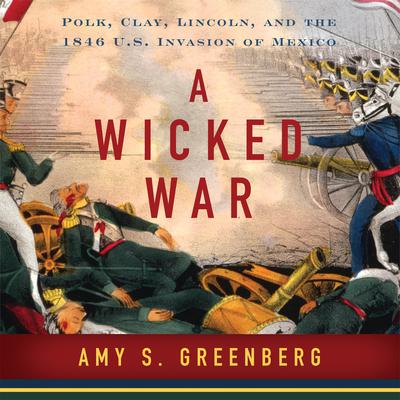 A Wicked War: Polk, Clay, Lincoln and the 1846 U.S. Invasion of Mexico

A San Francisco Chronicle Best Book for 2013 in Nonfiction

Our 1846 war with Mexico was a blatant land grab provoked by President James Polk. And while it secured the entire Southwest and California for America, it also exacerbated regional tensions over slavery, created the first significant antiwar movement in America, and helped lead the nation into civil war. A Wicked War is the definitive history of this conflict that turned America into a continental power. Amy Greenberg describes the battles between American and Mexican armies, but also delineates the political battles between Democrats and Whigs—the former led by the ruthless Polk, the latter by the charismatic Henry Clay, and a young representative from Illinois named Abraham Lincoln, who initially drew national attention as a critic of the war. Greenberg brilliantly recounts this key chapter in the creation of the United States, evoking time, place, event, and personality with equal parts authority and narrative flair.

“A Wicked War, with its emphasis on politics rather than military history, does for the Mexican-American war what James McPherson did for the Civil War with Battle Cry of Freedom, greatly broadening our understanding of the war. Certainly Professor Greenberg’s book will immediately become the standard account of the Mexican War, at last giving it an important place in the history of the United States. This book restores my faith in the merits of narrative history.” —Mark E. Neely, Jr., Pulitzer Prize-winning author of The Fate of Liberty
“Amy S. Greenberg’s new history elegantly unfolds the story of the war through the lives of five politicians…[Greenberg] immerse[s] her readers in the early 1840s…Gripping.” —San Francisco Chronicle
“The best account we have of the politics of Mr. Polk’s War…If one can read only a single book about the Mexican-American War, this is the one to read.” —New York Review of Books
“A condensed new study of the Mexican-American war portrays America’s terrible loss of innocence [when] waging war against an unoffending neighbor changed the tenor of American politics in the mid-nineteenth century...A well-rendered, muscular history of a war whose ramifications are still being carefully calibrated.” —Kirkus Reviews
“The seldom-sung Mexican War emerges as one of America’s most morally ambiguous and divisive conflicts in this illuminating history.” —Publishers Weekly
“A provocative main idea in a freshly original narrative.” —Booklist

Amy Greenberg is liberal arts research professor of history and women’s studies at Penn State. She is a leading scholar of Manifest Destiny and has held fellowships from the Huntington Library, the New York Historical Society, the Guggenheim Foundation, and the American Philosophical Society. She lives in State College, Pennsylvania.