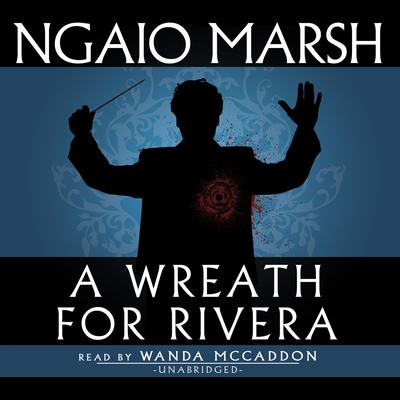 A Wreath for Rivera

Lord Pastern fired his revolver. The figure in the spotlight fell and the coup-de-theatre had become murder. Could Inspector Alleyn believe Pastern had let hatred of his future son-in-law go too far?

When Lord Pastern Bagott takes up with the hot music of Breezy Bellair and His Boys, his disapproving wife Cecile has more than usual to be unhappy about. The band's devastatingly handsome but roguish accordionist, Carlos Rivera, has taken a rather intense and mutual interest in her precious daughter, Felicite. So when a bit of stage business goes awry and actually kills him, it's lucky that Inspector Roderick Alleyn is in the audience. Now Alleyn must follow a confusing score that features a chorus of family and friends desperate to hide the truth and perhaps shelter a murderer in their midst.

“A succulent novel.” —New York Times
“It’s time to compare Christie to Marsh instead of the other way around.” —New York magazine
“Reader [McCaddon]…gives a lively, fully voiced reading that captures all the character nuances of this heterogeneous cast of characters.”  —Kliatt