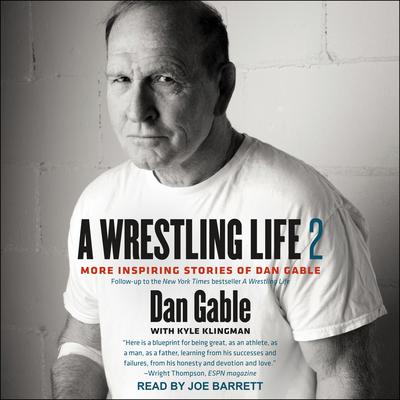 By Dan Gable
With Kyle Klingman
Read by Joe Barrett

When most people think of the celebrated greatness that is Coach Dan Gable, they think of an almost mythic intensity toward wrestling. Gable breathes and bleeds the sport, and faithfully applies lessons learned from both on and off the mat. Expanding upon Gable's first collection of stories, A Wrestling Life 2 goes a little deeper into the mindset and life events that have shaped the man, the wrestler, and the coach.

Through stories funny, heartfelt, intense, and always engaging, Gable shares more about the life he has led and what can be learned from those experiences. He goes on to detail what have come to be known as the Gable Trained principles that he follows to keep his life full of "wins," the revelations about how to cultivate success at the highest levels, and the reasons behind these steps for living well.

A Wrestling Life spent two months on the New York Times sports bestseller list, and has become an instant classic of sports memoirs. A Wrestling Life 2 is sure to add to Gable's ever-growing legacy and entertain and inspire wrestling fans everywhere.

Dan Gable has been named to several Halls of Fame including the USA Wrestling Hall of Fame, the US Olympic Hall of Fame, the National Wrestling Hall of Fame, and is the namesake of the National Wrestling Hall of Fame Dan Gable Museum in Waterloo, Iowa. In 2002, he was appointed to the President’s Council on Physical Fitness and Sports. He has been named the top wrestler of the twentieth century by Gannett News Services, is listed as one of the top coaches of the twentieth century by ESPN, and is named Iowa’s top sports figure in the past 100 years. In 1996, Gable was named one of the “100 Golden Olympians,” an honor bestowed to the top 100 US Olympians of all time. During the 2012 Olympics, he was inducted into the FILA Hall of Fame Legends of the Sport category, becoming one of three people in the world to receive this honor. He resides in Iowa City, Iowa, with his wife Kathy.