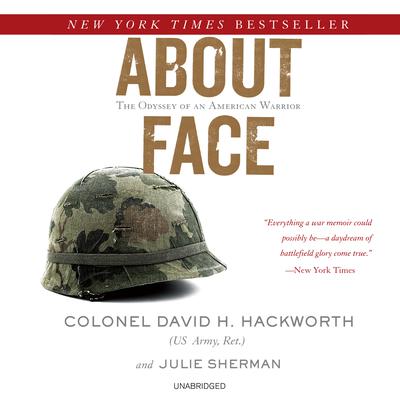 About Face: The Odyssey of an American Warrior

Called “everything a twentieth-century war memoir could possibly be” by the New York Times, this national bestseller by Colonel David H. Hackworth presents a vivid and powerful portrait of a life of patriotism.

From age fifteen to forty, David Hackworth devoted himself to the US Army and fast became a living legend. In 1971, however, he appeared on television to decry the doomed war effort in Vietnam. With About Face, he has written what many Vietnam veterans have called the most important book of their generation.

From Korea to Berlin, from the Cuban missile crisis to Vietnam, Hackworth’s story is that of an exemplary patriot, played out against the backdrop of the changing fortunes of America and the American military. It is also a stunning indictment of the Pentagon’s fundamental misunderstanding of the Vietnam conflict and of the bureaucracy of self-interest that fueled the war.

“A daydream of battlefield glory come true.” —New York Times
“Starling and important insights on American Values in war and peace.” —San Francisco Chronicle
“Honest, extremely intelligent, and perhaps the best military leader this country has had since Patton.” —Philadelphia Inquirer
“The engrossing autobiography of a fierce and fiercely outspoken warrior.” —Publishers Weekly
“America’s most decorated living soldier tells his life story in formidable detail with outstanding battlefield realism. Colonel Hackworth left the Army and went into exile over the conduct of the Vietnam War…Earnest and self-revealing…A rousing good book which will be useful to military professionals as well.” —Library Journal
“An exceptional warrior…A warrior’s heart.” —Washington Post Book World

Colonel David H. Hackworth (US Army, Ret.) spent almost five years of combat duty in Vietnam, as well as twenty-five years in the service of our nation’s defense. His books include About Face, a New York Times bestseller, and Hazardous Duty and The Price of Honor, national bestsellers.