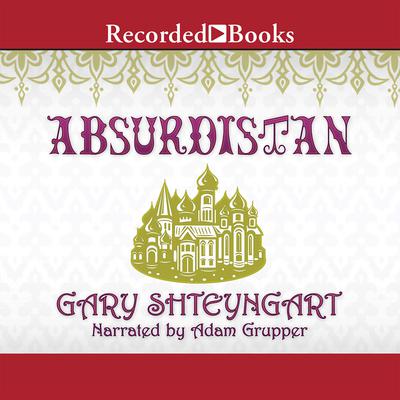 Named as one of the New York Times Year's Ten Best upon its publication, Gary Shteyngart's Absurdistan is a biting, poignant satire of American-style democracy and the American Dream. After returning to Russia to attend his father's funeral, 30-year-old Misha is subsequently denied a visa when he attempts to re-enter the United States. What follows is a series of misadventures through the Eastern Bloc in which Misha runs afoul of crooked politicians, businessmen, and bureaucracies all seemingly determined to keep him from his new home country.

“This novel is so immodestly vigorous, so burstingly sure of its barbaric excellence, that simply by breathing, sweating, and standing upright it exalts itself…Compared with most young novelists his age, who tend toward cutesy involution, Shteyngart is a giant mounted on horseback. He ranges more widely, sees more sweepingly, and gets where he’s going with far more aplomb.” —New York Times Book Review
“The exuberance of Shteyngart’s language keeps us engaged.”  —Washington Post
“Gary Shteyngart’s hilarious, virtuosic Absurdistan nails the tragicomedy of foreign relations…A satire that is profoundly funny, genuinely moving, and wholly lovable.” —Time
“One of the funniest books in recent memory…Read Absurdistan for Shteyngart’s exuberant, wise, hilarious voice…The novel is a long, funny, heartbreaking lament for home, whatever that means, and wherever that might be.” —Los Angeles Times Book Review
“By turns tender, pathetic, and hilarious…There is no one better [than Shteyngart] at skewering social systems.” —Wall Street Journal
“In his hilarious follow-up to The Russian Debutante’s Handbook, Shteyngart proves himself to be the post-Soviet era’s own Joseph Heller.” —Salon.com
“[Shteyngart is] obscenely gifted…[His] prose never fails to pop, and nothing escapes his satiric eye.” —Entertainment Weekly
“The first truly effective satire of the twenty-first century—one that hits the right cultural and political chords without coming off as sanctimonious or pedantic…This strange hybrid of comedy and violence is the only appropriate response to the global shitstorm it’s meant to mirror.” —New York Observer
“Shteyngart is writing some of the funniest lines in contemporary fiction and seems capable of doing so almost effortlessly.” —Miami Herald
“Masterful…[Shteyngart] brilliantly—and with high style—treads the knife-thin line between satire and despair.” —Cleveland Plain Dealer
“Absurdistan is a brilliant, fast-paced and idiosyncratic novel that swerves frighteningly close to dead-on political reporting…Evocative, touching, horrifying, funny, and clever all at once, this literary tragicomedy deserves its name.” —Seattle Times
“Fans of Gary Shteyngart’s first novel…will not be disappointed by his much-anticipated Absurdistan, which displays once again this comic author’s exhilarating talent for skewing the absurdities of contemporary culture…For all its rage and irony, Shteyngart’s Jewish heart pumps with love and empathy, even with the approaching shadow of no towers.” —Chicago Tribune
“A hilariously warped mockery of geopolitics, media, and war; a Catch-22 for the age of short attention spans.” —People
“Delightful…Take any one bite of Absurdistan and be amazed by the richness of its flavor…There is so much to like about this novel.” —Boston Sunday Globe
“A rare treat…There is something disturbingly familiar about Absurdistan. Shteyngart’s wacky vision of a post-Cold War world sinking beneath the weight of the American Century is not far from the mark.” —Rocky Mountain News
“No novelist thinks more globally than Gary Shteyngart…[He] has figured out how to be funny and appalling at the same time, often in the same sentence. He’s also surprisingly tender, making room at the heart of this caustic geopolitical burlesque for both a convincing love story and a sincere longing for home.” —Baltimore Sun
“Absurdly funny…The promise of The Russian Debutante’s Handbookis fulfilled.” —Dayton Daily News
“Absurdistan is a novel that could have been written jointly by Kurt Vonnegut, Chuck Palanhniuk, and Jonathan Swift—after a late night spent gorging on Fox News and Russian vodka sweetened with onions. That is to say, it is inventive, biting, and comically absurd in the way that only reality can be.” —Buffalo News
“A complex and enthralling commentary on the world we live in…Hilarious and highbrow all at once, [this book] is a brilliant read.” —Austinist
“A freakishly intelligent, verbally giddy, frequently flying ride.” —Elle
“Shteyngart piles on plots, characters, and flashbacks without losing any of the novel’s madcap momentum, and the novel builds to a frantic pitch before coming to a breathless halt on the day before 9/11. The result is a sendup of American values abroad and a complex, sympathetic protagonist worthy of comparison to America’s enduring literary heroes.” —Publishers Weekly (starred review)
“Riotously original…Richly satiric and filled with trenchant one-liners.” —Library Journal (starred review)
“Who else could tie together nineteenth-century Russian literature, hip-hop, and twenty-first-century oil politics and strife?” —Booklist
“A novel at once riotous and melancholic, intimate, and expansive, as it tracks the parallel arcs of personal and international events…Readers will root for Shteyngart’s protagonist, and enjoy the adventure found in this romp of a read.” —BookPage

Gary Shteyngart is the author of several books, including the New York Times bestselling memoir Little Failure, which was a finalist for the National Book Critics Circle Award, and the novel Super Sad True Love Story, winner of the Bollinger Everyman Wodehouse Prize. His books regularly appear on best-of lists around the world and have been translated into twenty-nine languages.