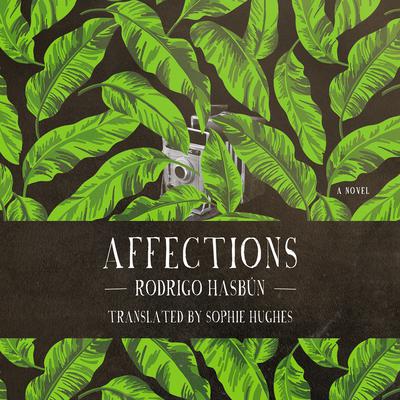 By Rodrigo Hasbun
Read by Rebecca Mitchell  and Rudy Sanda

Inspired by real events, Affections is the story of the eccentric, fascinating Ertl clan, headed by the egocentric and extraordinary Hans, once the cameraman for the Nazi propagandist Leni Riefenstahl. Shortly after the end of World War II, Hans and his family flee to Bolivia to start over. There, the ever-restless Hans decides to embark on an expedition in search of the fabled lost Inca city of Paitití, enlisting two of his daughters to join him on his outlandish quest into the depths of the Amazon, with disastrous consequences.

Set against the backdrop of the both optimistic and violent 1950s and 1960s, Affections traces the Ertls's slow and inevitable breakdown through the various erratic trajectories of each family member: Hans's undertakings of colossal, foolhardy projects and his subsequent spectacular failures; his daughter Monika, heir to his adventurous spirit, who joins the Bolivian Marxist guerrillas and becomes known as "Che Guevara’s avenger"; and his wife and two younger sisters left to pick up the pieces in their wake. In this short but powerful work, Hasbún weaves a masterfully layered tale of how a family's voyage of discovery ends up eroding the affections that once held it together.