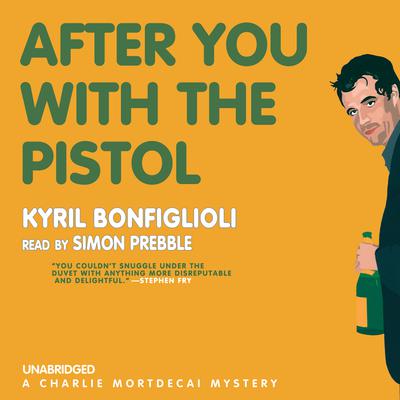 After You with the Pistol: A Charlie Mortdecai Mystery

Charlie’s back in After You with the Pistol, along with his new bride, Johanna, and his thuggish manservant, Jock. He’s also still drinking too much whiskey—and anything else he can get his hands on—which makes it all the more difficult to figure out what the beautiful and fabulously wealthy Johanna is up to when she tries to convince Charlie to kill the Queen. Suffice it to say that Johanna is not quite what she seems. Don’t miss this brilliant mixture of comedy, crime, and suspense.

“The sensibility of this wonderful farce with its joyously acrobatic literary style, affronted dignity, and frank assertions of cowardice is part Bertie Wooster and part Henry Flashman—to which has been added a soupcon of something like J. Peterman.” —Boston Sunday Globe
“Bonfiglioli’s marvelous creation never flags, mixing the best of Ian Fleming’s 007 with P. G. Wodehouse’s Bertie Wooster. Listening to Mortdecai natter on…all while he escapes certain death at every corner, is one of life’s great pleasures.” —Barnes and Noble Review

Kyril Bonfiglioli (1928–1985) was an art dealer, accomplished fencer, a fair shot with most weapons, and a serial marrier of beautiful women. He claimed to be “abstemious in all things except drink, food, tobacco, and talking” and “loved and respected by all who knew him slightly.”