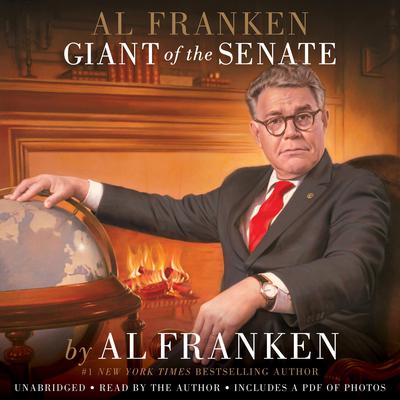 Al Franken, Giant of the Senate

An AudioFile Best Audiobook of the Year for 2017

Al Franken, Giant of the Senate is a book about an unlikely campaign that had an even more improbable ending: the closest outcome in history and an unprecedented eight-month recount saga, which is pretty funny in retrospect. It’s a book about what happens when the nation’s foremost progressive satirist gets a chance to serve in the United States Senate and, defying the low expectations of the pundit class, actually turns out to be good at it.

It’s a book about our deeply polarized, frequently depressing, occasionally inspiring political culture, written from inside the belly of the beast. In this candid personal memoir, the honorable gentleman from Minnesota takes his army of loyal fans along with him from Saturday Night Live to the campaign trail, inside the halls of Congress, and behind the scenes of some of the most dramatic and/or hilarious moments of his new career in politics.

“Franken narrates his latest book in a voice that captures both of his key public personas: current US senator and former humorist…He recounts his long fight to be seated in the Senate chamber and the learning experiences afterward with a deft, humorous tone that doesn’t betray his honed political acumen. Well, almost: His take on Ted Cruz will no doubt raise eyebrows.” —AudioFile
“Flips the classic born-in-a-shack rise to political office tale on its head. I skipped meals to read this book…because every page was funny.” —New York Times
“The best political book of 2017.” —New Republic
“A genuinely funny book, often hilarious…The Senate, and the country, would be the poorer without him. He’s an American original.” —Washington Post
“Franken has weaponized the gifts that proved so useful for comedy—a sharp eye, a sharper tongue, the ability to tease out the essential absurdity of a given situation and deliver the goods with maximum impact.” — Rolling Stone

Al Franken is the author of several #1 New York Times bestsellers and is a two-time spoken word Grammy Award winner. He graduated from Harvard College, and before running for office, spent thirty-seven years as a comedy writer, author, and radio talk-show host. He rose to prominence as one of the original Saturday Night Live writers in the 1970s and won five Emmy Awards for his work on SNL. He has taken part in seven USO tours, visiting our troops overseas in Bosnia, Kosovo, Iraq, Afghanistan, and Kuwait. He was first elected to the United States Senate in 2008 and re-elected in 2014.