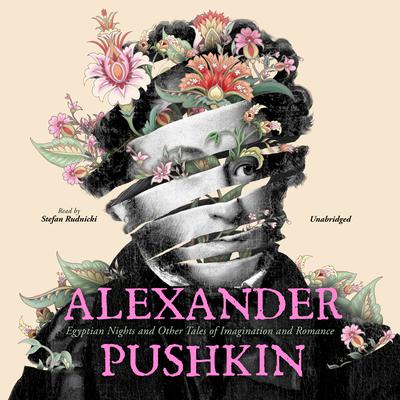 Alexander Pushkin: Egyptian Nights and Other Tales of Imagination and Romance

This original compilation from Skyboat Media features the most inventive and poetic of Alexander Pushkin’s short fiction. Exposed to French culture at a young age, Pushkin’s work reflects these sensibilities, and he combines this with stories of his Russian ancestors that his grandmother would relate to him and his siblings during their summers near Moscow.

In the unfinished title story, “Egyptian Nights,” Charsky is ashamed of the way writers and poets are viewed in his society, so he tries to keep his identity as one a secret. But when an Italian improvisatore asks for help in finding a way to make money with his art, Charsky must confront what it means to be an artist in the public eye, and all the acclaim—and criticism—that comes with it. “Marie” is a timeless tale of love and duty that chronicles the romance between young Peter Grineff and Marie, his captain’s daughter, during the rebellion of the Cossacks under the reign of Catherine the Great. In “The Coffin-Maker,” Adrian Prokohorov, a rigid, unfriendly undertaker, moves his business and his two daughters to a new city. At his housewarming party, he must deal with some of his spookier clientele. And in “The Queen of Spades,” a young man who has always shied away from gambling is intrigued by the story of a Countess who won a large sum of money with a specific set of cards and then never played another hand. Eager to win a fortune for himself, he sets out to find the Countess and extract from her the combination of cards she played in that fateful game.

Featuring these stories and more, Egyptian Nights and Other Tales of Imagination and Romance showcases Pushkin’s unique voice and insightful prose from throughout his career.

Alexander Pushkin (1799–1837), known as the father of Russian literature, was descended from Russian nobility and from an African great-grandfather raised at the court of Peter the Great. His commitment to social reform resulted in government censorship of his work and a period of exile. He died after fighting a duel at the age of thirty-seven.