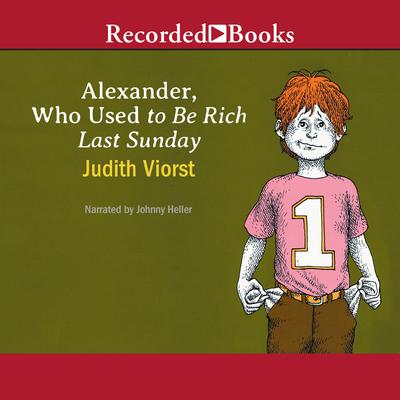 Alexander, Who Used to Be Rich Last Sunday

Alexander's two brothers have money in their pockets. All he has are bus tokens. It isn't fair. He had money last Sunday when his grandparents gave them each a dollar. Now it's all gone. At first he was saving the money for a walkie-talkie. But saving money is hard. He bought gum with some of the money, but when it stopped tasting good, he had to buy more. Good-bye 15 cents. Then Eddie offered to rent him his snake for an hour, and he couldn't pass up a chance like that. Betting his brother that he could hold his breath while he counted to 300 wasn't a good idea, either. He'll never own that walkie-talkie! Judith Viorst has a gift for getting inside a little boy's head and making sense of what goes on there. Paired with Johnny Heller's acting talent, the result is a good chuckle, laced with real compassion, for the child in everyone.

Judith Viorst was born and brought up in New Jersey, graduated from Rutgers University, moved to Greenwich Village, and has lived in Washington, DC, since 1960, when she married Milton Viorst, a political writer. They have three sons and seven grandchildren. A 1981 graduate of the Washington Psychoanalytic Institute, Viorst writes in many different areas: science books; children’s picture books—including the beloved Alexander and the Terrible, Horrible, No Good, Very Bad Day; adult fiction and nonfiction; poetry for children and adults; and musicals.