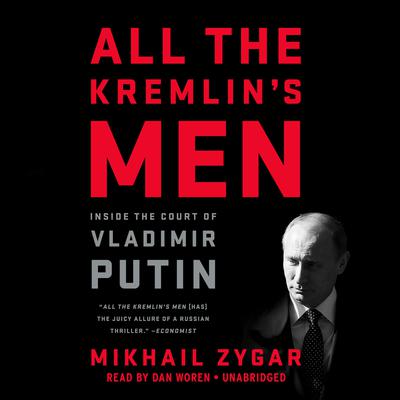 All the Kremlin’s Men: Inside the Court of Vladimir Putin

All the Kremlin’s Men is a gripping narrative of an accidental king and a court out of control. Based on an unprecedented series of interviews with Vladimir Putin’s inner circle, this book presents a radically different view of power and politics in Russia. The image of Putin as a strongman is dissolved. In its place is a weary figurehead buffeted—if not controlled—by the men who at once advise and deceive him.

The regional governors and bureaucratic leaders are immovable objects, far more powerful in their fiefdoms than the president himself. So are the gatekeepers, those officials who guard the pathways to power, on whom Putin depends as much as they rely on him. The tenuous edifice is filled with all of the intrigue and plotting of a Medici court, as enemies of the state are invented and wars begun to justify personal gains, internal rivalries, or one faction’s biased advantage.

A bestseller in Russia, All the Kremlin’s Men is a shocking revisionist portrait of the Putin era and a dazzling reconstruction of the machinations of courtiers running riot.

“Dan Woren gives a very good reading of this interesting look at how political power really works in Russia…Woren’s resonant bass is clear, easy to understand, and appropriately expressive. His deliberate pacing makes this work easy to follow and gives an overall authoritative effect to the entire production. He reads quotes from Russians with an adequate enough Russian-sounding accent…Overall, a very good production.” —AudioFile
“Fascinating…Zygar takes us deep into the secret world of the courtiers whose task is to shape Mr. Putin’s access to information so that he makes the ‘right’ decision.” —Wall Street Journal
“Of the many accounts written about the Russian president, Mikhail Zygar’s insider’s guide to his court is one of the most compelling…The book charts not just the machinations of the various players…It also acutely traces the evolution of Putin’s mind.” —Guardian (London)
“A tale of Russian politics based on personalities, ego, and ambition, rather than policy, convictions, or ideology…The stream of court intrigue gives All the Kremlin’s Men the juicy allure of a Russian thriller.” —Economist (London)
“Mikhail Zygar, one of Russia’s smartest and best-sourced young journalists, provides a necessary corrective with his new book…[He] obtained rare access to Kremlin insiders, piecing together a portrait of a ‘collective Vladimir Putin’ that is both less calculating—and more dangerous—than the singular strongman of our imagination.” —New York Times

Mikhail Zygar is the former editor-in-chief of the only independent TV station in Russia, TV Rain (Dozhd). Previously, he worked for Newsweek Russia and the business daily Kommersant. He was awarded the 2014 International Press Freedom Award by the Committee to Protect Journalists.