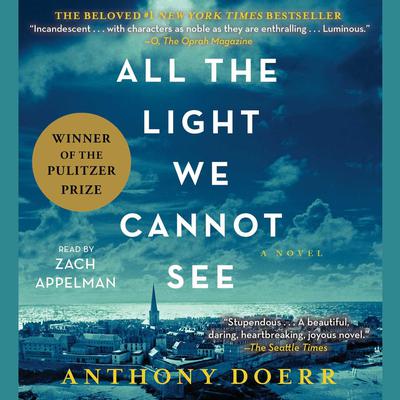 All the Light We Cannot See: A Novel

Winner of the 2015 Pulitzer Prize for Fiction

Winner of the 2015 Audie Award for Best Fiction Narration

One of Audible’s Best Audiobooks of 2014

A Publishers Weekly Pick of the Week, May 2014

A May 2014 LibraryReads Pick

A 2014 LibraryReads Favorites of the Favorites selection

Winner of the 2015 Audie Award for Fiction

From the highly acclaimed, multiple award-winning Anthony Doerr, the stunningly beautiful instant New York Times bestseller about a blind French girl and a German boy whose paths collide in occupied France as both try to survive the devastation of World War II.

Marie-Laure lives in Paris near the Museum of Natural History, where her father works. When she is twelve, the Nazis occupy Paris and father and daughter flee to the walled citadel of Saint-Malo, where Marie-Laure’s reclusive great uncle lives in a tall house by the sea. With them they carry what might be the museum’s most valuable and dangerous jewel.

In a mining town in Germany, Werner Pfennig, an orphan, grows up with his younger sister, enchanted by a crude radio they find that brings them news and stories from places they have never seen or imagined. Werner becomes an expert at building and fixing these crucial new instruments and is enlisted to use his talent to track down the resistance. Deftly interweaving the lives of Marie-Laure and Werner, Doerr illuminates the ways, against all odds, people try to be good to one another.

Doerr’s “stunning sense of physical detail and gorgeous metaphors” (San Francisco Chronicle) are dazzling. Ten years in the writing, a National Book Award finalist, All the Light We Cannot See is a magnificent, deeply moving novel from a writer “whose sentences never fail to thrill” (Los Angeles Times).

“Incandescent…A luminous work of strife and transcendence.” —O, The Oprah Magazine
“Hauntingly beautiful.” —New York Times
“Enthralling told, beautifully written.” —Washington Post
“Gorgeous...Moves with the pace of a thriller.” —San Francisco Chronicle
“Dazzling.” —Boston Globe
“Stupendous…A beautiful, daring, heartbreaking, oddly joyous novel.” —Seattle Times
“The written equivalent of a Botticelli.” —Oregonian
“If a book’s success can be measured by its ability to move readers and the number of memorable characters it has, Story Prize winner Doerr’s novel triumphs on both counts. Along the way, he convinces readers that new stories can still be told about this well-trod period and that war—despite its desperation, cruelty, and harrowing moral choices—cannot negate the pleasures of the world.” —Publishers Weekly (starred review)
“This novel has the physical and emotional heft of a masterpiece. The main protagonists are brave, sensitive, and intellectually curious, and in another time they might have been a couple. But they are on opposite sides of the horrors of World War II, and their fates ultimately collide…The novel presents two characters so interesting and sympathetic that readers will keep turning the pages hoping for an impossibly happy ending…Highly recommended.” —Library Journal (starred review)
“A novel to live in, learn from, and feel bereft over when the last page is turned, Doerr’s magnificently drawn story seems at once spacious and tightly composed…Doerr masterfully and knowledgeably recreates the deprived civilian conditions of war-torn France and the strictly controlled lives of the military occupiers.” —Booklist (starred review)
“Doerr presents us with two intricate stories, both of which take place during World War II; late in the novel, inevitably, they intersect…Doerr captures the sights and sounds of wartime and focuses, refreshingly, on the innate goodness of his major characters.” —Kirkus Reviews (starred review)
“There’s something familiar and comforting about Zach Appelman’s performance in this beautifully crafted audiobook. His clear, confident tone also features subtle warmth. His voice animates the story…Details and images are elegant in their simplicity, and the dramatic history is tempered by humanity—thanks to both a skilled author and a masterful narrator. Winner of an AudioFile Earphones Award.” —AudioFile
“This jewel of a story is put together like a vintage timepiece, its many threads coming together so perfectly. Doerr’s writing and imagery are stunning.” —Abraham Verghese, author of Cutting for Stone

Anthony Doerr is the author of All the Light We Cannot See, winner of the Pulitzer Prize, the Carnegie Medal, the Alex Award, and a #1 New York Times bestseller. He is also the author of the story collections Memory Wall and The Shell Collector, the novel About Grace, and the memoir Four Seasons in Rome. He has won five O. Henry Prizes, the Rome Prize, the New York Public Library’s Young Lions Award, the National Magazine Award for fiction, a Guggenheim Fellowship, and the Story Prize.