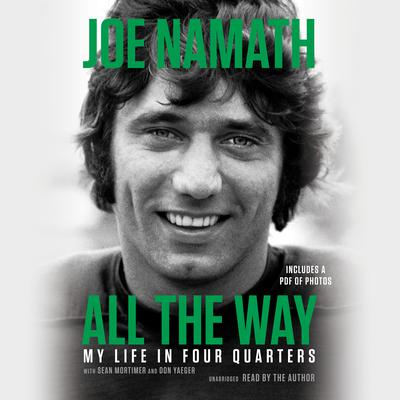 All the Way: My Life in Four Quarters

By Joe Namath , with Sean Mortimer  and Don Yaeger
Read by Joe Namath

A #1 Amazon.com bestseller in Football Biographies

Timed for the fiftieth anniversary of his legendary Super Bowl “Guarantee,” the NFL icon who first brought show business to sports is finally ready to tell the story of his spectacular rise and reign as “Broadway Joe,” to his struggles with alcoholism, to the redemption he found in god later in life.

“I guarantee it.” Three days before the now-legendary 1969 Super Bowl III, quarterback Joe Namath promised the nation that he could lead the New York Jets to a clear underdog victory against the seemingly invincible Baltimore Colts. In what has been remembered as perhaps the biggest upset in football history, that game catapulted the young superstar to not only football immortality but also into a stratosphere of celebrity the likes of which only a few athletes have ever achieved.

But before all that, “Broadway Joe” was just Joe, the small-town kid from Beaver Falls, PA, with an arm so impressive that it caught the attention of University of Alabama’s Bear Bryant. Following a knockout four-year run at Alabama, Namath was ceremoniously courted by every professional football team. Yet it was the New York Jets who offered a then-unheard-of figure, $427,000, to bring football’s Golden Boy to the upstart AFL. In an era of raucous rebellion, shifting social norms, and political upheaval, Namath’s roughish charm quickly became symbolic of the commercialization of pro sports, while his progressive views on race further pioneered integration on the gridiron. By twenty-six, with a Super Bowl title under his belt, Namath was quite simply the most famous athlete alive.

Although his legacy has been cemented in the history books, underneath the eccentric yet charismatic personality was a player plagued by injury and addiction, both sex and substance. Doctors treated him with a stiff cocktail of painkillers, some strong enough to literally knock out a horse, and Namath matched these prescriptions with his own medication, Johnnie Walker, which fueled countless nights that began alongside the likes of Sinatra and Mantle, and ended in bed with the moment’s most fashionable model or actress.

When his injuries permanently derailed his career, he turned to Hollywood and endorsements, not to mention a tumultuous marriage with Deborah Mays and fleeting bouts of sobriety. Now seventy-four years old and dry, Namath is finally ready to pull back the curtain on a life that might have seemed charmed, but in reality was anything but. Rich with personal history, private insights, and deep reflection, Namath is prepared to reveal the man behind the icon in this memoir that is as much about football and fame as it is about addiction, fatherhood, and coming to terms with one’s own mortality.

“Mr. Namath doesn’t shy away from the physical and emotional setbacks he has experienced on and off the field.” —Wall Street Journal
“Joe has stories to tell…Even casual sports fans will find this an enthralling read. For all his flaws—and the author does not hide them—Namath is a likable and lively raconteur. What’s more, his is a remarkable life. He not only beat the Colts, he whooped alcoholism, evolved into a doting grandfather, and endures the many side effects of gridiron fame with nary a complaint.” —USA Today
“In a new autobiography, the great NFL quarterback details his ups (like a Super Bowl victory) and downs (like the Suzy Kolber incident and alcoholism) as he stares down his legacy.” —NPR
“One of the greatest quarterbacks ever, Joe Namath, narrates his own work, and he’s perfect for the dual role of storyteller and narrator…He narrates with an energetic tone…His voice has joie de vivre, and that’s a pleasure to listen to.” —AudioFile

Joe Namath is a former American football quarterback. He played for the New York Jets for most of his professional football career and played his final season with the Los Angeles Rams. He was elected to the Pro Football Hall of Fame in 1985.