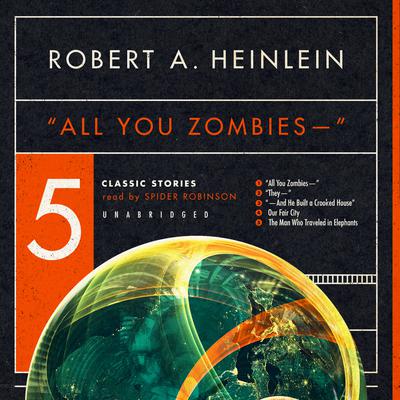 “All You Zombies—”: Five Classic Stories

By Robert A. Heinlein
Read by Spider Robinson

Featuring "All You Zombies—," the basis for the movie Predestination

This collection from Grand Master Robert A. Heinlein includes five short stories sure to please science fiction fans everywhere. The title story tells the tale of a young man who meets a time-traveling bartender whose origins—and relation to the young man—are more complex and stranger than the Ouroboros ring on the barkeep's finger. In The Man Who Traveled in Elephants—one of both Heinlein and Spider Robinson's all-time favorite stories—we join a former traveling salesman on a bus. The man and his wife had once traveled with a host of imaginary animals searching for places to sell elephants. "They—" takes listeners inside a mental institution, where a man suffering from delusions has been confined. In Our Fair City, a parking attendant named Pappy, a sentient whirlwind named Kitten, and a crusading reporter named Pete aim to take down their corrupt city government. Lastly, in "—And He Built a Crooked House," a clever architect designs a house in the shape of the shadow of a tesseract, but it collapses through the fourth dimension when an earthquake shakes it into a more stable form.