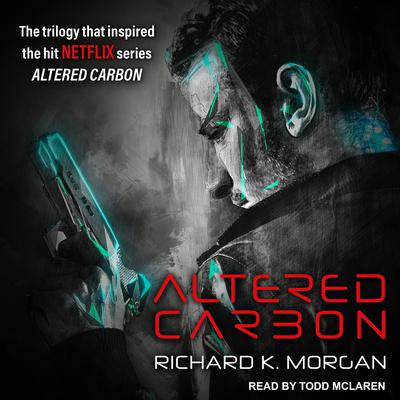 In the twenty-fifth century, humankind has spread throughout the galaxy, monitored by the watchful eye of the U.N. While divisions in race, religion, and class still exist, advances in technology have redefined life itself. Now, assuming one can afford the expensive procedure, a person's consciousness can be stored in a cortical stack at the base of the brain and easily downloaded into a new body (or "sleeve") making death nothing more than a minor blip on a screen. Ex-U.N. envoy Takeshi Kovacs has been killed before, but his last death was particularly painful. Dispatched one hundred eighty light-years from home, re-sleeved into a body in Bay City (formerly San Francisco, now with a rusted, dilapidated Golden Gate Bridge), Kovacs is thrown into the dark heart of a shady, far-reaching conspiracy that is vicious even by the standards of a society that treats "existence" as something that can be bought and sold. For Kovacs, the shell that blew a hole in his chest was only the beginning. . . . "Morgan's debut novel, the first in a series, combines noir mystery with ultra-high tech science to create a complex sf thriller. Featuring a hard-nosed antihero with his own sense of personal honor and ethics, this is highly recommended for sf collections."—Library Journal

“If you’ve ever wondered what kind of science fiction Raymond Chandler might have written for a futuristic Philip Marlowe, check out Altered Carbon, by Richard K. Morgan. In this rousing first novel, Morgan has reimagined The Big Sleep as 25th century noir.” —New York Times
“This seamless marriage of hardcore cyberpunk and hard-boiled detective tale is an astonishing first novel.” —London Times
“Morgan perfectly blends speculative fiction and period noir with his hard-boiled detective, wise-cracking police, dishy dame, and murder. His future society and technology is well drawn and plausible, making this a satisfying read.” —RT Book Reviews (4 stars)