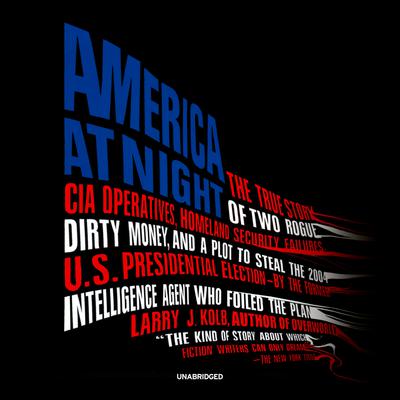 America at Night: The True Story of Two Rogue CIA Operatives, Homeland Security Failures, Dirty Money, and a Plot to Steal the 2004 US Presidential Election—by the Former Intelligence Agent Who Foiled the Plan

A former CIA spy and author of Overworld recounts the stories of master criminals Robert Sensi and Richard Hirschfeld, describing their ties to the Republican Party and al-Qaeda, their numerous multi-million-dollar investment scams, and the partnership by which they smuggled billionaire Russian mafiosos into the United States.

“The kind of story about which fiction writers can only dream.” —New York Times
“Exciting from beginning to end.” —Kirkus Reviews
“Stories of powerful men behaving badly have irresistible appeal, and Kolb relates them in prose far more lively than the average bureaucrat’s.” —Publishers Weekly

America at Night reads like a thriller, but the story is true and extensively documented. Larry J. Kolb shows us how one well-informed individual did what all of our security agencies could not: trail two brilliant covert political operatives through a labyrinth of disguised identities and dark crimes to expose corruption at the highest levels.