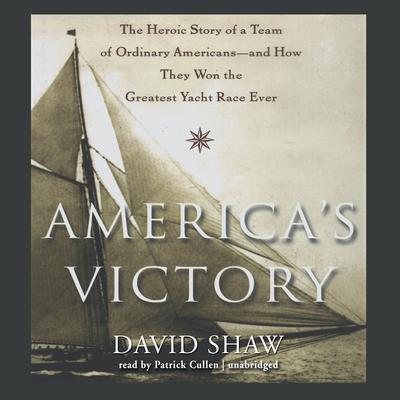 America’s Victory: The Heroic Story of a Team of Ordinary Americans—and How They Won the Greatest Yacht Race Ever

Set against the backdrop of the first world’s fair in London, America’s Victory takes listeners into a world rich in adventure and history in an unforgettable story of skill, daring, and honor at the heart of our national identity.

In 1850, a brilliant young boat designer and an unlikely team of humble, hard working men faced the might and arrogance of the British empire in a yacht race for The Great Exhibition in England. Revolutionary in design and strikingly beautiful, the schooner America set sail against the world’s greatest maritime nation.

This is an account of an amazing feat accomplished long ago at the turning point in the growth of a young nation’s confidence, but it is also the story of a victory of the American spirit that bravely lives on today.

“[A] fascinating sports story...Cullen’s semi-voiced presentation stirs the emotions, yet his smooth performance also allows the listener to focus on the action.” —Kliatt
“Exceedingly well-researched and documented...Shaw produces an exciting recounting of the great race.” —Publishers Weekly
“A historical adventure containing all the elements readers love: underdogs, danger, a Dirty Dozen-like assembling of the crew, and of course, a happy ending. Wonderful reading.” —Booklist
“A sailing epic masterfully told with emphasis in all the right places.” —Kirkus Reviews

David W. Shaw is the author of The Sea Shall Embrace Them, Inland Passage, Daring the Sea, and Flying Cloud. He is a frequent contributor to many sailing magazines. He lives in Westfield, New Jersey, and sails his cutter in Maine.