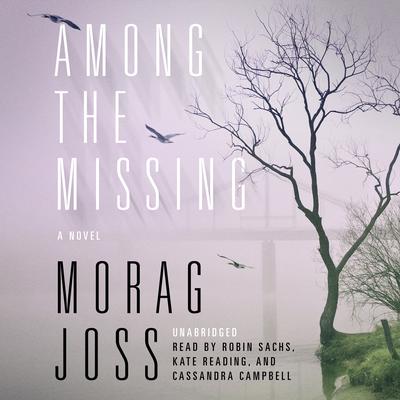 Among the Missing: A Novel

“Whenever an accident or natural disaster occurs from which bodies may never be recovered, there is always somebody for whom it becomes a chance to disappear. There is always somebody who, believing that vanishing from one life is the way to enter a better one, will choose to be presumed among the missing; somebody who would rather be thought dead than have to say ‘I’m leaving you.’”

A pregnant woman, believed killed in a bridge accident in the Scottish highlands, seizes her chance to disappear from her uncaring husband. Determined to safeguard her baby’s future and reinvent herself, she befriends illegal immigrant Silva, whose husband Stefan and daughter Anna, as she alone knows, have died in her place. As the bridge is rebuilt, the two women build a precarious existence in a makeshift home by the river. While Silva waits for Stefan and Anna’s return and the pregnant woman awaits the birth of her child, they are helped by the boatman, Ron, whose devotion to them masks his guilt for a past disaster for which he must atone.

Each of them having crossed some bridge in retreat from the world, each seeking an ever-elusive peace of mind and struggling with displacement and grief, together the three exiles conjure an unstable mix of trust and distrust, compounded by love and jealousy, both parental and sexual. With the discovery of Stefan’s and Anna’s bodies in the river, the tension in their uneasy triangle mounts inexorably and unbearably. With the birth of the new baby only days, then hours away, it finally breaks.

“A haunting, harrowing punch to the heart, Among the Missing is flat-out brilliant. About the secrets we keep, the lives we are desperate to live, and the chances we miss, it’s a psychological dazzler. Truly, one of my favorite books of this year—or any year.” —Caroline Leavitt, New York Times bestselling author of Pictures of You
“Morag Joss is a writer who knows the old truth that genuine suspense comes not from car chases or gunplay, but from the clash of conflicting hearts. Her latest novel, Among the Missing, is evidence not of a rising talent, but of one already fully formed.” —Thomas H. Cook, author of The Fate of Katherine Carr
“This remarkable novel has an abundance of suspense at its core, put forth in beautiful prose that all but glows on the page…Like most thrillers with a literary bent, this one spends time with the thoughts and feelings of the characters. In lesser hands, this can be stultifying, especially if the people aren’t that interesting. But these two women have fascinating inner lives, and Joss details them in vivid, propulsive language.” —Booklist (starred review)
“The harrowing collapse of a Scottish bridge links three lost souls as they lurch toward an even more horrifying finale…Joss builds the relationships among her sad trio slowly, through excruciatingly subtle modulations of tone. But the ending fully justifies every intimation of imminent doom.” —Kirkus Reviews

Morag Joss grew up on the west coast of Scotland. Her first novel, Funeral Music, was nominated for a Dilys Award, and her fourth, Half Broken Things, won the CWA Silver Dagger Award and was adapted for UK national television. Her sixth novel, The Night Following, was nominated for the 2009 Edgar Award for Best Novel. Morag Joss lives in Hampshire, England.