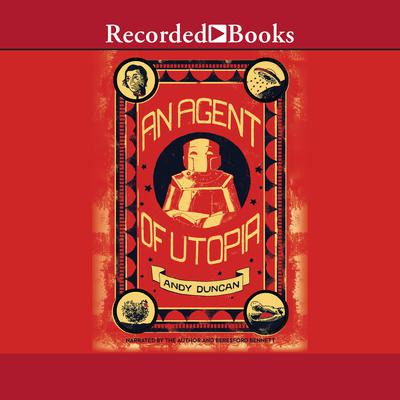 An Agent of Utopia: New and Selected Stories

In the tales gathered in An Agent of Utopia: New and Selected Stories you will meet a Utopian assassin, an aging UFO contactee, a haunted Mohawk steelworker, a time-traveling prizefighter, a yam-eating Zombie, and a child who loves a frizzled chicken—not to mention Harry Houdini, Zora Neale Hurston, Sir Thomas More, and all their fellow travelers riding the steamer-trunk imagination of a unique twenty-first-century fabulist.

From the Florida folktales of the perennial prison escapee Daddy Mention and the dangerous gator-man Uncle Monday that inspired “Daddy Mention and the Monday Skull” to the imagined story of boxer and historical bit player Jess Willard in World Fantasy Award winner “The Pottawatomie Giant” or the Ozark UFO contactees in Nebula Award winner “Close Encounters” to Flannery O’Connor’s childhood celebrity in Shirley Jackson Award finalist “Unique Chicken Goes in Reverse” Duncan’s historical juxtapositions come alive on the page as if this Southern storyteller were sitting on a rocking chair stretching the truth out beside you.

Duncan rounds out his explorations of the nooks and crannies of history in two irresistible new stories, “Joe Diabo’s Farewell”—in which a gang of Native American ironworkers in 1920s New York City go to a show—and the title story, “An Agent of Utopia” in which he reveals what really might have happened to Thomas More’s head.

“Zany and kaleidoscopic, the twelve stories in Duncan’s third collection draw on Southern traditions of tall tales and span time periods, continents, and the realm of human imagination to create an intricate new mythology of figures from history, literature, and American folklore…This is a raucous, fantastical treat.” —Publishers Weekly (starred review)
“Whatever the topic, all of Duncan’s fictions are united by an evocative, playful, and deeply accomplished storytelling style. Highly recommended for fans of Kelly Link or other slipstream writers and for any reader looking to lose themselves in an engaging and fun reading experience.” —Booklist (starred review)
“Must rank as one of this year’s best collections.” —Tor.com