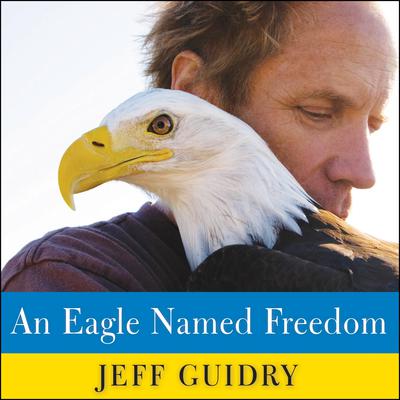 An Eagle Named Freedom: My True Story of a Remarkable Friendship

From the moment Sarvey Wildlife Care Center volunteer Jeff Guidry saw the emaciated baby eagle with broken wings, his life was changed. For weeks he and the center's staff tended to the grievously injured bird. Miraculously, she recovered, and Jeff became her devoted caretaker. Though Freedom would never fly, she had Jeff as her wings. And when Jeff was diagnosed with Stage 3 non-Hodgkins lymphoma in 2000, Freedom returned his gift. Between sessions of debilitating chemotherapy, Jeff returned to Sarvey and began taking Freedom for walks, which soothed his spirit. Soon Freedom dominated his thoughts and dreams, guiding him to fight for life. Eight months into his battle, Jeff learned that he was cancer-free. His first stop was Sarvey to walk Freedom. Somehow this special bird seemed to understand the significance of the day. For the very first time she wrapped both her wings around Jeff, enveloping him in an avian hug. In March 2008, Jeff shared his remarkable experience with a friend—an exchange that would eventually circle the globe and touch countless hearts. An Eagle Named Freedom is a tender story of hope, love, trust, and life, and an affirmation of the spiritual connection that humans and animals share.

Jeff Guidry is a rock and rhythm-and-blues guitarist who has played with such artists as Brian Wilson of the Beach Boys and guitarist Roy Buchanan. He spends his spare time volunteering for the Sarvey Wildlife Center in Washington State. He lives in Monroe, Washington.