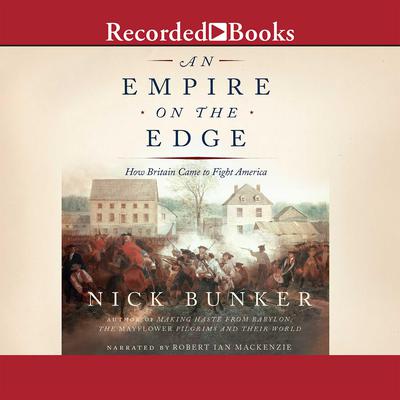 An Empire on the Edge: How Britain Came to Fight America

Finalist for the 2015 Pulitzer Prize for History

The story of the American Revolution told from the unique perspective of British Parliament and the streets of London, rather than that of the Colonies. Here, Nick Bunker explores and illuminates the dramatic chain of events that led to the outbreak of the war-revealing a tale of muddle, mistakes, and misunderstandings by men in London that led to the Boston tea party and then to the decision to send redcoats into action against the minutemen. Charting the three years prior to the war during which the British regime in America was already collapsing, Bunker shows how a lethal combination of politics and personalities led to a war that should never have been fought. Revisiting the tea party from the point of view of British economics and drawing upon new and unpublished sources from Britain and the U.S., he argues that thanks to the colonialists' misunderstandings about the strength of British power, and London's inability to take American cries for freedom seriously, both were pushed beyond the point of compromise. The outcome? A war that few welcomed but all were powerless to stop.

Nick Bunker, graduate of Cambridge and Columbia University, has had a diverse career in finance and journalism. A former investment banker and reporter for the Financial Times, he now lives with his wife in Lincolnshire, England.