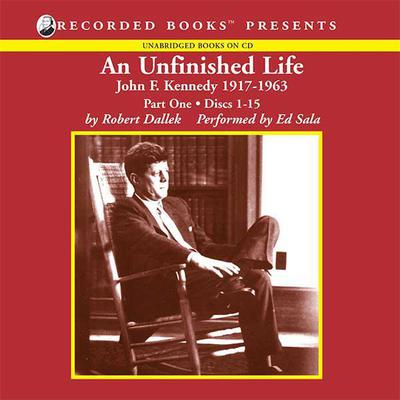 Nationally best-selling author Robert Dallek is one of the most respected historians in America. He has won the American Book Award and the Bancroft Prize for his excellent biographies of U.S. presidents. In An Unfinished Life, Dallek offers the first authoritative, single-volume story of the life of John F. Kennedy. Drawing from an archive of previously unavailable information, Dallek paints a brilliant portrait of a legendary president who was bold, brave, and ultimately human. Dallek's research draws from firsthand sources, newly discovered documents, never-before-opened archives, and personal medical records. Dallek explores Kennedy's many strengths, while not shying away from his weaknesses. Beginning with the birth of the Kennedy dynasty in Ireland, Dallek traces their rise to prosperity in the bustling world of late 19th-century Boston. As the story weaves through Jack's privileged childhood, we glimpse the inner workings of an affluent family driven to even greater success and power. From his daring exploits in World War II, which made him a national hero, to his awkward first forays into the political arena, and then to the White House, the great John F. Kennedy emerges as a man of irresistible charm, character, and determination in An Unfinished Life.

Robert Dallek is the author of several works of nonfiction, including the #1 New York Times bestseller An Unfinished Life: John F. Kennedy, 1917–1963; Nixon and Kissinger, a Pulitzer Prize finalist and New York Times bestseller; a two-volume biography of Lyndon Johnson, Lone Star Rising and Flawed Giant, among other books. His writing has appeared in the New York Times, Washington Post, Atlantic, and Vanity Fair. He is an elected fellow of the American Academy of Arts and Sciences and of the Society of American Historians, for which he served as president in 2004–2005. He has won the Bancroft Prize, among numerous other awards for scholarship and teaching.