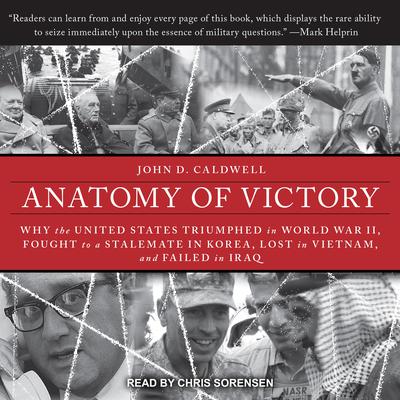 Anatomy of Victory: Why the United States Triumphed in World War II, Fought to a Stalemate in Korea, Lost in Vietnam, and Failed in Iraq

This groundbreaking book provides the first systematic comparison of America's modern wars and why they were won or lost. John D. Caldwell uses the World War II victory as the historical benchmark for evaluating the success and failure of later conflicts. Unlike WWII, the Korean, Vietnam, and Iraqi wars were limited, but they required enormous national commitments, produced no lasting victories, and generated bitter political controversies.

Caldwell comprehensively examines these four wars through the lens of a strategic architecture to explain how and why their outcomes were so dramatically different. He defines a strategic architecture as an interlinked set of continually evolving policies, strategies, and operations by which combatant states work toward a desired end. Policy defines the high-level goals a nation seeks to achieve once it initiates a conflict or finds itself drawn into one. Strategy means employing whatever resources are available to achieve policy goals in situations that are dynamic as conflicts change quickly over time. Operations are the actions that occur when politicians, soldiers, and diplomats execute plans.

A strategic architecture, Caldwell argues, is thus not a static blueprint, but a dynamic vision of how a state can succeed or fail in a conflict.

John D. Caldwell retired in 2007 after a fifty-year career working with defense think tanks and aerospace companies. Trained as a political scientist with a PhD from the University of California, Santa Barbara, he was first posted to Saigon in 1968 as part of a classified research project for the Department of Defense’s Advanced Research Projects Agency. Caldwell joined TRW Space & Defense in 1982 to work on major defense, NASA, and intelligence community programs. He remains an active consultant at Northrop Grumman Aerospace Systems, which acquired TRW in 2002. He lives in Santa Barbara with his wife, Karen, and their dog Daisy, cat Mr. Bingley, and Martha, a desert tortoise.