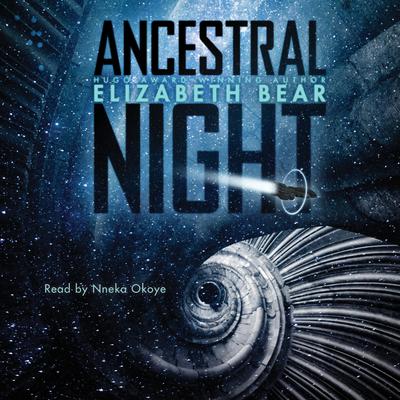 A space salvager and her partner make the discovery of a lifetime that just might change the universe in this wild, big-ideas space opera from Hugo Award-winning author Elizabeth Bear.

Halmey Dz and her partner Connla Kurucz are salvage operators, living just on the inside of the law...usually. Theirs is the perilous and marginal existence—with barely enough chance of striking it fantastically big—just once—to keep them coming back for more. They pilot their tiny ship into the scars left by unsuccessful White Transitions, searching for the relics of lost human and alien vessels. But when they make a shocking discovery about an alien species that has been long thought dead, it may be the thing that could tip the perilous peace mankind has found into full-out war.

Energetic and electrifying, Ancestral Night is a dazzling space opera, sure to delight fans of Alastair Reynolds, Iain M. Banks, and Peter F. Hamilton—“Bear's ability to create breathtaking variations on ancient themes and make them new and brilliant is, perhaps, unparalleled in the genre” (Library Journal, starred review).

“In Elizabeth Bear’s richly textured Ancestral Night…Bear gives her characters the space to develop on their own terms, never missing a chance to world build in the interim…The profound connection between man and machine at its heart will keep readers turning the pages.” —BookPage (starred review)
“This exciting story set in a richly detailed milieu is successful on many levels…Amid a space opera resurgence, Bear’s novel sets the bar high. —Publishers Weekly (starred review)