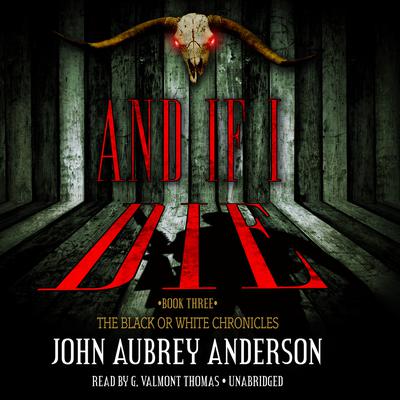 And If I Die

The Black or White Chronicles: Book 3

Anderson concludes his powerful trilogy about the ongoing battle between forces of evil and the good Christian citizens of a 1968 Mississippi community.

Mose Washington and his "grandson," Bill, are still on the lam after fleeing Cat Lake, where Bill's mom was brutally slain years earlier. Hiding out under assumed names, Bill is enrolled at North Texas State University and learning to ride bulls, while Mose continues to protect Bill from the evil he knows hunts them incessantly. When a dangerous and determined assassin hired by an enemy closes in, Bill’s faith is challenged to a point where even Mose's devoted guidance can't seem to save him. What was once just part of a bedtime prayer becomes an all too-real consideration for both men: And if I die…?

“This third offering in the Black and White Chronicles is the best yet. While some novels involving battles of darkness glorify the terror and the terrorist and leave the good guys weeping in the dirt, here the balance between dark and light is subtle and well-wrought.” —RT Book Reviews (4 stars)

John Aubrey Anderson was growing up in Mississippi cotton country when he saw John Wayne star in Flying Tigers and knew he wanted to be a pilot. After graduating from Mississippi State University, he joined the Air Force, served three tours in Southeast Asia, and went on to fly planes for Delta Air Lines for twenty-eight years. Now retired from the cockpit, he writes novels, including the acclaimed Black or White Chronicles trilogy, and lives with his wife in the Dallas/Ft. Worth area of Texas.