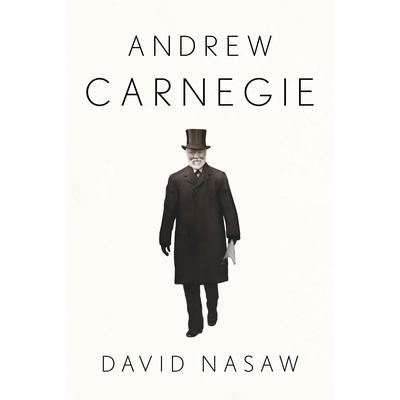 Finalist for the 2007 Pulitzer Prize for Biography

Andrew Carnegie, whose lifetime spanned the era from the beginning of the Industrial Revolution to the First World War was America's first modern titan. In this magnificent biography, celebrated historian David Nasaw brings to life this period of unprecedented transition—a time of self-made millionaires, scabs, strikes, and a new kind of philanthropy—through the fascinating rags-to-riches story of one of our most iconic business legends.

The Scottish-born son of a failed weaver and a mother who supported the family by binding shoes, Andrew Carnegie was the embodiment of the American dream. In his rise from a job as a bobbin boy in a cotton factory to being the richest man in the world, he was single-minded, relentless, and a major player in some of the most violent and notorious labor strikes of the time. The prototype of today's billionaire, he was a visionary in the way he earned his money and in the way he gave it away.

Nasaw explains how Carnegie made his fortune and how he tried to pull the world back from a war he predicted. Brimming with new material, personal letters, diaries, prenuptial agreements, letters to and from presidents and prime ministers, Nasaw plumbs the core of this fascinating man, fixing him in his place as one of the most compelling, elusive, and multifaceted personalities of the 20th century.

David Nasaw is the author of Andrew Carnegie, which was a finalist for the Pulitzer Prize, awarded the New York Historical Society Prize in American History, and named a New York Times Notable Book of the Year, and The Chief: The Life of William Randolph Hearst, winner of the Bancroft Prize for history and the J. Anthony Lukas Book Prize and a finalist for the National Book Critics Circle Award for biography. He is the Arthur M. Schlesinger, Jr., Professor of History at the Graduate Center of the City University of New York.