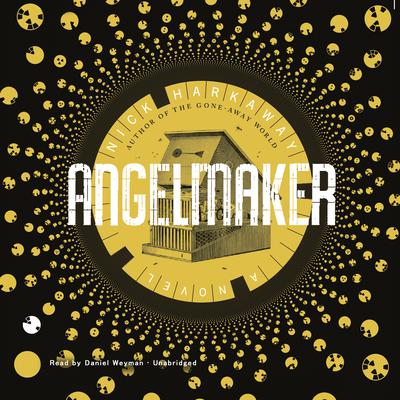 Joe Spork repairs clocks, a far cry from his late father, a flashy London gangster. But when Joe fixes one particularly unusual device, his life is suddenly upended. Joe’s client, Edie Banister, is more than just a kindly old lady—she’s a former superspy. And the device? It’s a 1950s doomsday machine. And having triggered it, Joe now faces the wrath of both the government and a diabolical South Asian dictator, Edie’s old archnemesis. With Joe’s once-quiet world now populated with mad monks, psychopathic serial killers, scientific geniuses, girls in pink leather, and threats to the future of conscious life in the universe, he realizes that the only way to survive is to muster the courage to fight, help Edie complete a mission she gave up years ago, and pick up his father’s old gun.

Nick Harkaway was born in Cornwall in 1972. He studied philosophy, sociology, and politics at Clare College, Cambridge, and then worked in the film industry. His novels include The Gone-Away World, Angelmaker, and The Blind Giant. He lives in London with his wife.