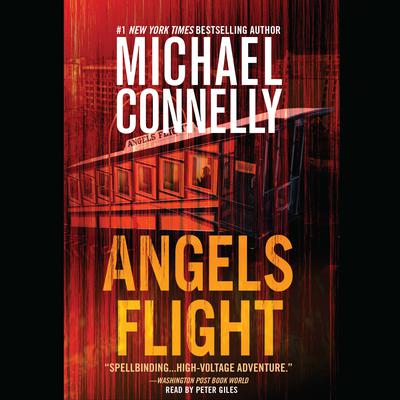 By Michael Connelly
Read by Peter Giles  and Dick Hill

An activist attorney is killed in a cute little L.A. trolley called Angels Flight, far from Harry Bosch’s Hollywood turf. But the case is so explosive - and the dead man’s enemies inside the L.A.P.D. are so numerous - that it falls to Harry to solve it. Now the streets are superheating. Harry’s year-old Vegas marriage is unraveling. And the hunt for a killer is leading Harry to another high-profile L.A. murder case, one where every cop had a motive. The question is, did any have the guts?

“Bosch is a wonderful old-fashioned hero who isn’t afraid to walk through the flames — and suffer the pain for the rest of us.” —New York Times Book Review
“Loaded with electrifying sequences, intriguing ‘NYPD Blue’-like big-city politics and procedures, and a killer plot stacked with high-speed twists and turns that’ll keep you guessing until its very end, Angels Flight is an intense and terrific read. —Barnes & Noble, editorial review