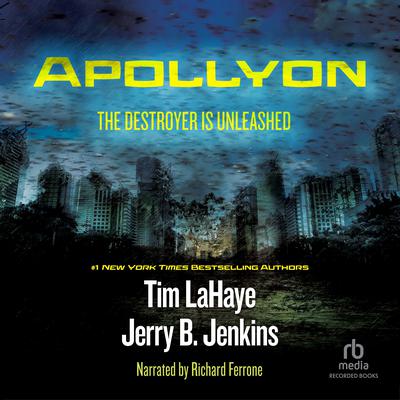 Apollyon: The Destroyer is Unleashed

By  Tim LaHaye  and Jerry B. Jenkins
Read by Richard Ferrone

The Left Behind Series: Book 5

When Left Behind, the first book in LaHaye and Jenkins' inspirational saga, was published, it attracted millions of fans worldwide. Since then, each succeeding book has joined it on best-seller lists. Apollyon, the fifth volume, is a thrilling continuation of the battle between the followers of Christ and the forces of Nicolae, the Antichrist. The Tribulation Force is gathering in Jerusalem, where thousands of the faithful are receiving crucial teachings from their leader. They must be prepared for the fourth Trumpet Judgement prophesied in Revelations. Soon, even the sun will be affected, and a plague of anguish will be released on earth. As the Tribulation Force continues its dramatic struggle against evil, Apollyon offers stunning apocalyptic visions. Richard Ferrone's riveting narration captures the suspense of the physical conflicts and the drama of the spiritual challenges.

Dr. Jerry B. Jenkins, former vice president for publishing and currently chairman of the board of trustees for the Moody Bible Institute of Chicago, is the author of nearly two hundred books, including the bestselling Left Behind series. Twenty of his books have reached the New York Times bestsellers list, seven debuting at number one. Formerly editor of Moody magazine, Jenkins is now a contributing editor to Writer’s Digest, and his writing has appeared in Time, Reader’s Digest, Parade, Guideposts, and dozens of Christian periodicals. His nonfiction includes as-told-to biographies of Hank Aaron, Orel Hershiser, Walter Payton, Nolan Ryan, and many others. Jenkins owns the Christian Writers Guild, which mentors and trains writers.