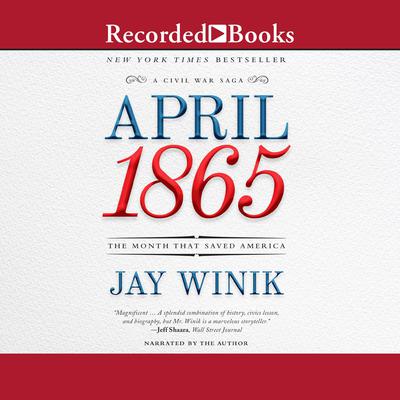 April 1865: The Month That Saved America

This New York Times best-seller from noted historian and acclaimed author Jay Winik forever changes common perceptions of the final month of the American Civil War. April 1865 could have destroyed the nation. Instead, it saved it. As April begins, the battered Confederate capital of Richmond falls to the Union Army. Robert E. Lee surrenders his forces to Ulysses S. Grant at Appomattox one week later. In good spirits and sensing the war's end, President Abraham Lincoln attends a comedic play--and is assassinated. Simultaneously, Secretary of State William Seward is brutally attacked, but survives. Along with fears that remaining Confederate soldiers will break into guerrilla bands, these events threaten to plunge America into turmoil. But it is not to be. Winik's engrossing narrative sweeps readers along from one incredible moment to the next until, remarkably, peace is reached. A provocative and deeply researched account, this modern classic is a major reassessment of the 30 most pivotal days in United States history.

“Winik’s ability to see the big picture in the close-up (and vice versa), and to compose riveting narrative, is masterful. This book is a triumph. Popular history at its best, this book should appeal widely to readers beyond the usual Civil War crowd.” —Publishers Weekly

Jay Winik is the author of the New York Times bestseller April 1865, among other works. He is a senior scholar of history and public policy at the University of Maryland and a regular contributor to the Wall Street Journal and New York Times. He lives in Chevy Chase, Maryland.