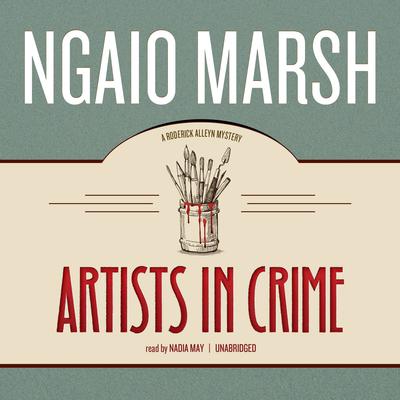 In this thrilling yarn, the art of detection gets clouded by desire.

It was a bizarre pose for beautiful model Sonia Gluck—and her last. For in the draperies of her couch lay a fatal dagger, and behind her murder lies all the intrigue and acid-etched temperament of an artist's colony. Called in to investigate, Scotland Yard's Inspector Roderick Alleyn thinks this is just another routine case…for now. The model was killed in full view of the entire class, making everyone in it a suspect. Then there's the matter of a second murder. As if he didn't have enough on his plate,before he can corner the killer Alleyn finds his own passions unexpectedly stirred by the feisty painter Agatha Troy—brilliant artist and suspected murderess. And Agatha has nothing but scorn for the art of detection.

“It’s time to start comparing Christie to Marsh instead of the other way around.” —New York magazine
“Artists in Crime is Miss Marsh’s best…Her touch is light without lapsing into the facetious, her characterization excellent, her plot neat and precise.” —Spectator
“Marsh moves into top gear.” —Susan Howatch, novelist
“[Wanda McCaddon] brings all the right intonations and vocal characterizations to her narration, resulting in a thoroughly enjoyable production.”  —Library Journal