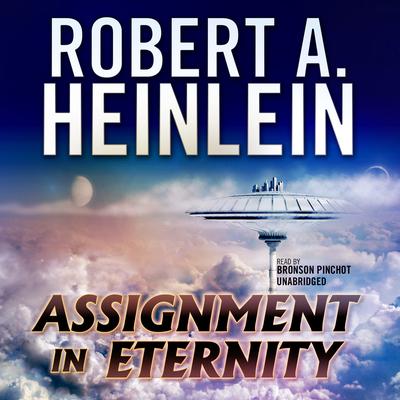 Robert A. Heinlein is widely and justly regarded as the greatest practitioner of the art of science fiction who has ever lived. Here are two of his greatest short novels:

In which the greatest superspy of them all is revealed as the leader of a league of supermen and women who can't quite decide what to do with the rest of us.

In which it is proved that we are all members of that league—or would be, if we but had eyes to see.

A pair of the Master's finest: one on the nature of Being, the other on what it means to be a man.

“Like most of Heinlein’s writing, Assignment in Eternity is immediately engaging. Various sci-fi stories of the distant and near future reflect his classic blend of individualism and futurism. Bronson Pinchot infuses the stories with a Golden Age Radio sensibility, using both broad drama and subtle nuances in accent to develop the future settings. Pinchot’s deep voice is perfectly suited to Heinlein’s generally masculine themes. His female voices are rough but adequate. Even Heinlein’s invented language, “Speedtalk,” proves little challenge. Although understanding the brief exchanges is unnecessary, Pinchot makes the strange syllables sound entirely natural.” —AudioFile