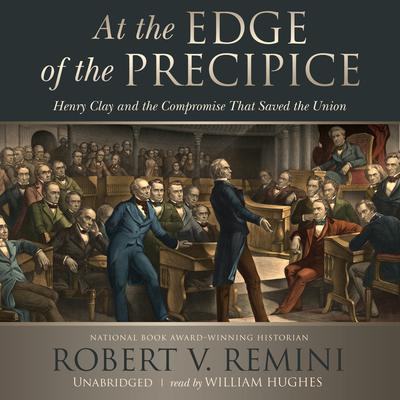 At the Edge of the Precipice: Henry Clay and the Compromise That Saved the Union

It has been said that if Henry Clay had been alive in 1860, there would have been no Civil War. Based on his performance in 1850, it may well be true. In that year, the United States faced one of the most dangerous crises in its history, having just acquired a huge parcel of land from the war with Mexico. Northern and Southern politicians fought over whether slavery should be legal on the new American soil. After a Northern congressman introduced a proviso to forbid slavery in any territory acquired from Mexico, Southerners threatened to secede from the Union. Only Henry Clay, America’s great compromiser, could keep the Union together, saving it from dissolution for ten crucial years.

In this masterful contribution to American history, Remini explores Henry Clay’s final and most important act of bipartisanship.

“Clay, who also delivered the 1820 Missouri Compromise, emerges as a complex figure, a slave owner who regarded slavery as an evil that betrayed American values…Remini ably dissects a dangerous moment in the nation’s history and the remarkable but flawed man who ushered the nation through it.” —Publishers Weekly
“William Hughes reads the book with an air of solemnity but not somnolence. He varies his pacing, especially during quoted material, when he slows down noticeably, offering a kind of aural quotation marks.” —AudioFile
“An informed and lively recounting of the (in)famous Compromise of 1850…showing how the ‘great men’ like Henry Clay tried to manage sectional reconciliation and their own ambitions.” —Library Journal
“Condensed with well-dramatized brevity, Remini’s account will captivate the American-history audience.” —Booklist
“Remini breaks down the debate into palatable pieces for the lay reader…A fresh look at the value of compromise in advancing the general interest.” —Kirkus Reviews
“Robert Remini paints a vivid portrait of Henry Clay in this tightly focused analysis of a critical moment in United States history…A finely detailed examination of the art of compromise in politics as well as a splendid testimonial to Henry Clay’s inestimable value in our nation’s history.” —Shelf Awareness

Robert V. Remini, historian of the US House of Representatives, has been teaching and writing about American history for more than half a century. He has written more than twenty books, including the definitive three-volume biography The Life of Andrew Jackson, which won the National Book Award (1984). His other books include biographies of Henry Clay, Daniel Webster, John Quincy Adams, and Joseph Smith. His Andrew Jackson and His Indian Wars won the Spur Award for best western nonfiction from the Western Writers of America. He lives in Wilmette, Illinois.