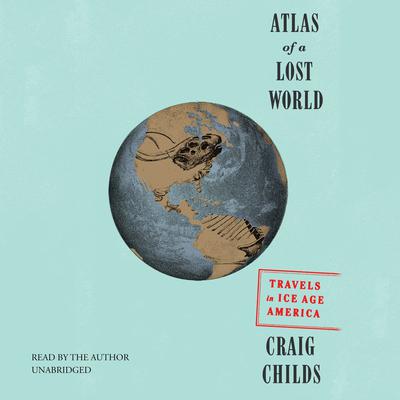 Atlas of a Lost World: Travels in Ice Age America

An Audible Pick of Most Anticipated Listens of Spring

From the author of Apocalyptic Planet comes a vivid travelogue through prehistory, that traces the arrival of the first people in North America at least twenty thousand years ago and the artifacts that tell of their lives and fates.

In Atlas of a Lost World, Craig Childs upends our notions of where these people came from and who they were. How they got here, persevered, and ultimately thrived is a story that resonates from the Pleistocene to our modern era. The lower sea levels of the Ice Age exposed a vast land bridge between Asia and North America, but the land bridge was not the only way across. Different people arrived from different directions and not all at the same time.

The first explorers of the New World were few, their encampments fleeting. The continent they reached had no people but was inhabited by megafauna—mastodons, giant bears, mammoths, saber-toothed cats, five-hundred-pound panthers, enormous bison, and sloths that stood one story tall. The first people were hunters—Paleolithic spear points are still encrusted with the proteins of their prey—but they were wildly outnumbered and many would themselves have been prey to the much larger animals.

Atlas of a Lost World chronicles the last millennia of the Ice Age, the violent oscillations and retreat of glaciers, the clues and traces that document the first encounters of early humans, and the animals whose presence governed the humans’ chances for survival. A blend of science and personal narrative reveals how much has changed since the time of mammoth hunters, and how little. Across unexplored landscapes yet to be peopled, readers will see the Ice Age, and their own age, in a whole new light.

“Clever, smartly written and altogether enthusiastic…The past is a country to which one cannot return, but Atlas of a Lost World at least helps you imagine what you might be missing.” —Wall Street Journal
“A wonderful and adventurous book.” —Aspen Daily News
“Childs’s walk-in-their-shoes account takes on pinpointing ‘the world’s most contentious prehistoric problems’—how and where humans came to the Americas….Childs’s account will fire the imagination.” —Publishers Weekly (starred review)
“[A] transporting tour d’horizon…The author brings readers to prehistoric sites, pointing out where artifacts have been found. He presents each site like a diorama, describing what it would have looked like eons ago…[and] the author backs up his theses with the latest in archaeological research.” —Kirkus Reviews (starred review)
“Scintillating…Childs has found history deeper than politics, and in rich, evocative prose, he makes it startlingly relevant to readers.” —Booklist (starred review)
“Author and narrator Craig Childs blends the two effectively, making listeners feel they are part of the journey. His easygoing delivery sounds more like a conversation than a reading, especially in the first-person portions of the audiobook. In the scientific portions, he presents the evidence and theories clearly at a pace that makes the material easy to follow…Listeners will take away a basic understanding of the issues. And because Childs covers the latest scientific finds, the audiobook will be of interest even to listeners who are well acquainted with the field.” —AudioFile
“A very engaging read that allows readers a real glimpse into the prehistoric world; Childs ably transforms archaeological theories into relatable concepts.” —Library Journal

Craig Childs, naturalist, adventurer, and desert ecologist, is the author of numerous books, including The Animal Dialogues, House of Rain, The Way Out, The Secret Knowledge of Water, Apocalpytic Planet, and Soul of Nowhere. He has been the recipient of numerous awards, including the Ellen Meloy Desert Writers Award, the Rowell Award for the Art of Adventure, the Sigurd F. Olson Nature Writing Award, and, for his body of work, the 2003 Spirit of the West Award. He has been a regular commentator for NPR’s Morning Edition, and his work has appeared in the New York Times, Los Angeles Times, Men’s Journal, Outside, the Sun, and Orion Magazine.