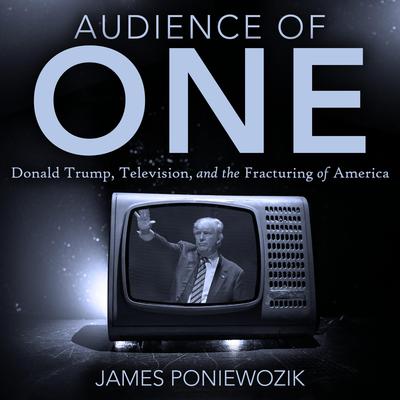 Audience of One: Television, Donald Trump, and the Politics of Illusion

A Washington Post Notable Book of the Year in Nonfiction

A Publishers Weekly Pick of 10 Best Books of the Year

In the tradition of Neil Postman's masterpiece Amusing Ourselves to Death, Audience of One shows how American media have shaped American society and politics, by interweaving two crucial stories. The first story follows the evolution of television from the three-network era of the twentieth century, which joined millions of Americans in a shared monoculture, into today's zillion-channel, Internet-atomized universe, which sliced and diced them into fractious, alienated subcultures. The second story is a cultural critique of Donald Trump.

Reaching back to the 1940s, when Trump and commercial television were born, Poniewozik illustrates how Donald became "a character that wrote itself, a brand mascot that jumped off the cereal box and entered the world, a simulacrum that replaced the thing it represented." Viscerally attuned to the media, Trump shape-shifted into a boastful tabloid playboy in the 1980s; a self-parodic sitcom fixture in the 1990s; a reality-TV "You're Fired" machine in the 2000s; and finally, the biggest role of his career, a Fox News–obsessed, Twitter-mad, culture-warring demagogue in the White House.

“Poniewozik…expands on his newspaper work by dissecting the president through the lens of his favorite medium.” — Entertainment Weekly
“Narrator Matthew Josdal’s delivery style—low-key, neutral, and occasionally skeptical—makes him the right voice for this fresh perspective on Donald Trump…Josdal’s well-paced delivery and the author’s McLuhanesque viewpoint make this mind-bending audiobook a standout. Winner of the AudioFile Earphones Award.” —AudioFile
“A funny, acerbic, and observant writer…[Poniewozik] uses his ample comedic gifts in the service of describing a slow-boil tragedy.” —New York Times Book Review
“Poniewozik is a witty, acrobatic guide through recent decades of TV.” —NPR
“Caustic, scintillating cultural history…One of the best analyses yet of the Trump era.” —Publishers Weekly (starred review)
“In his stellar debut…the author chronicles Trump’s actions against a deeply insightful history of vast changes in the media and popular culture during the period…This intelligent eye-opener belongs on the small shelf of valuable books that help explain how Trump created his base.” —Kirkus Reviews (starred review)

James Poniewozik has been the chief television critic of the New York Times since 2015. He was previously the television and media critic for Time magazine and media columnist for Salon.