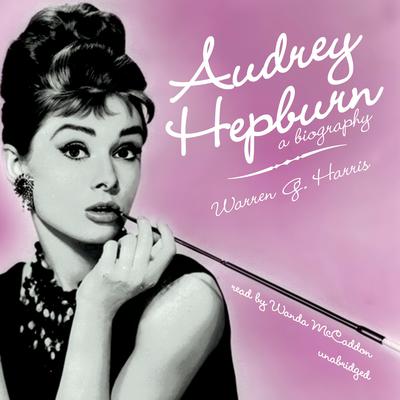 Beginning with her harsh childhood in Nazi-occupied Holland, Warren Harris chronicles Audrey Hepburn’s meteoric rise to Hollywood stardom: her chance encounter with Colette that led to the lead role in the Broadway version of Gigi, and her first starring role in Roman Holiday, for which she won the Academy Award for Best Actress.

Hepburn played opposite the top leading men, worked for the best directors, and picked from a wide range of roles. She memorably embodied Truman Capote’s Holly Golightly in Breakfast at Tiffany’s and went from rags to Technicolor Victorian beauty in My Fair Lady. Warren Harris also traces Hepburn’s affairs and unhappy marriages, as well as her later work as goodwill ambassador for UNICEF. Throughout the book he illuminates her special ability to exude grace and style, both on screen and off.

“This engrossing biography is rich in details about the making of Hepburn’s films at a time in Hollywood—and the world—we may never know again.” —Library Journal
“At times, [McCaddon’s] graceful portrayal of Hepburn is so authentic that the listener momentarily mistakes her for the genuine article. Poised and polished, [McCaddon] effortlessly personifies the many varied characters in Hepburn’s life. Whether Hepburn is experiencing terror during the war years as she delivers secret messages or is receiving accolades for stage performances, [McCaddon] employs the perfect interpretation.” —AudioFile
“[For] libraries wanting more than one look at Hepburn’s life.” —Booklist

Warren G. Harris, author of more than a half-dozen celebrity biographies, has worked as a publicity and advertising executive for Paramount Pictures. He lives in New York City.