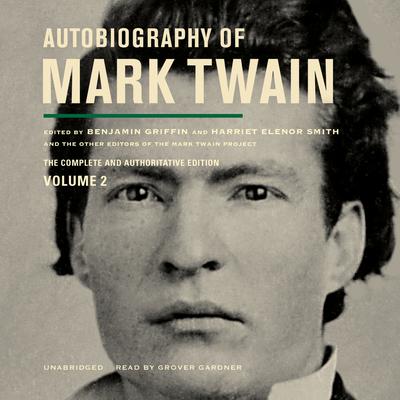 By Mark Twain
Edited by Benjamin Griffin , Harriet Elinor Smith , and other editors of the Mark Twain Project
Read by Grover Gardner

A San Francisco Chronicle Best Book of 2013 in Nonfiction

Mark Twain's complete, uncensored Autobiography was an instant bestseller when the first volume was published in 2010, on the centennial of the author's death, as he requested. Published to rave reviews, the Autobiography was hailed as the capstone of Twain's career. It captures his authentic and unsuppressed voice, speaking clearly from the grave and brimming with humor, ideas, and opinions.

The eagerly awaited second volume delves deeper into Twain's life, uncovering the many roles he played in his private and public worlds. Filled with his characteristic blend of humor and ire, the narrative ranges effortlessly across the contemporary scene. He shares his views on writing and speaking, his preoccupation with money, and his contempt for the politics and politicians of his day. Affectionate and scathing by turns, his intractable curiosity and candor are everywhere on view.

“To most general readers, the first volume of the Autobiography of Mark Twain arrived in 2010 as an unexpected centennial surprise…This mammoth, singular autobiography became a bestseller on both sides of the Atlantic. Now, as the second volume arrives, the surprise is abated, but the pleasure remains.This thousand-page opus contains Twain’s accounts, memories, and musings on his beloved wife Clara and his daughter Susy; his old friend, then rival Bret Harte; publishers, politicians, and imperialists. At times, the nakedness of his strong opinions helps explain why he wanted these reflections to remain secret for so long.” —Barnes & Noble, editorial review
“If you surrender yourself to the sound of his voice, the pleasure of Twain’s company proves pretty hard to resist. His narrative may be loose, but at least it never loses sight of its subject.” —New Yorker
“His autobiography, Twain explains, serves not as a window but as ‘a mirror, and I am looking at myself in it all the time’…Griffin and Smith’s careful annotations clarify the chronology running through Twain’s reflections about the face looking back at him from his mirror—now set in the perfect deadpan of a master humorist, now contorted with the acute anguish of a distressed soul. A treasure deserving shelf space next to Huck Finn and Tom Sawyer.” —Booklist (starred review)
“Twain traveled extensively and befriended many luminaries, and his colorful experiences give the book the same Dickensian scope as the first volume and present a vivid picture of America in the nineteenth century and Twain’s indelible mark on it.” —Publishers Weekly
“Set aside all ideas of starting at the beginning and reading through to the end. This is a book to keep on your bedside table, or in the kitchen, or the garage, or anyplace else you might want to pick it up. Follow Clemens’ own advice in reading it, as he did in writing it: Start reading at no particular point; wander at your free will all over it; read only about the thing that interests you for the moment; drop it the moment its interest threatens to pale; and turn your eye upon the new and more interesting thing that has intruded itself into your gaze meantime. Believe me, there are plenty of these in this wonderful volume.” —Hartford Courant
“In case you had any doubt about it, the new book demonstrates that Twain dictated as well as he wrote.” —Washington Post
“The publishing sensation of the year.” —San Francisco Chronicle
“Another delightful round of humor and candor, reminiscence and insider sketches of the people and politics of Twain’s day.” —Sacramento Bee
“Twain is frequently sad and cynical in these late-in-life writings (just a few years before his death) but his devastating wit and sharp-eyed commentary are on full display as well.” —Christian Science Monitor
“One sees a mind bubbling and hears a uniquely American voice.” —Literary Review
“One of the more marvelous literary projects of our time.” —Buffalo News
“The great American author, aided by his scholarly editors, continues to spin out a great yarn covering his long life…Twain admirers will find this volume indispensable and will eagerly await the third volume.” —Kirkus Reviews (starred review)