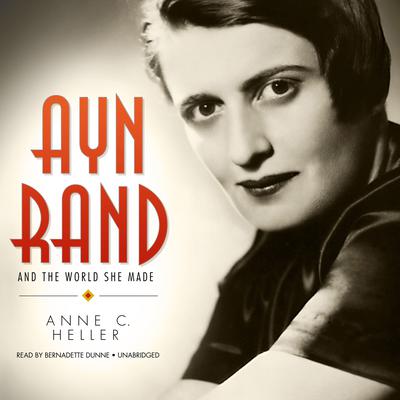 Ayn Rand and the World She Made

Ayn Rand is best known as the author of two phenomenally best-selling ideological novels, The Fountainhead and Atlas Shrugged, which have sold over twelve million copies in the United States alone. Through them, she built a cult following in the late 1950s and became the guiding light of Libertarianism and of White House economic policy in the 1960s and ‘70s. Her defenses of radical individualism and of selfishness as a “capitalist virtue” have permanently altered the American cultural landscape.

Anne Conover Heller traveled to Russia to discover Rand’s Russian and Jewish roots and her misunderstood youth, interview surviving acquaintances, and unearth new archival material. The result is the most comprehensive, revealing and unbiased biography of one of the most important figures of the twentieth century.

“My philosophy, in essence, is the concept of man as a heroic being, with his own happiness as the moral purpose of his life, with productive achievement as his noblest activity, and reason as his only absolute.” —Ayn Rand
“If we perceive Rand as the sum of her unique experiences—and editor/journalist Heller goes to great lengths to describe just how exceptional they were—we begin to appreciate Rand as an incomparable thinker, even if we don’t support her ideas.”  —Library Journal, Best Books of 2009

Anne Conover Heller has written for such publications as Vogue, Mademoiselle, TriQuarterly, and Esquire. She is the former fiction editor of Esquire and Redbook and a former executive editor at Condé Nast Publications.