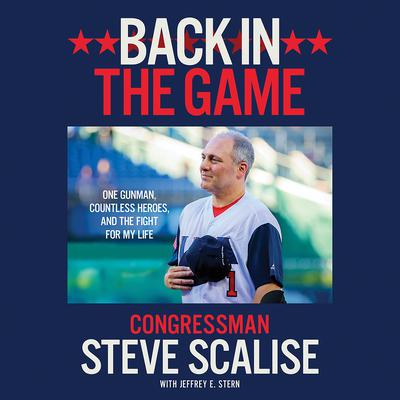 Back in the Game: One Gunman, Countless Heroes, and the Fight for My Life

Back in the Game is the inspiring story of how a massive political assassination at baseball practice for Republican members of Congress was narrowly avoided and how the Majority Whip fought his way back to the People’s House.

On the morning of June 14, 2017, at a practice field for the annual Congressional Baseball Game, a man opened fire on the Republican team, wounding five, including Louisiana Congressman Steve Scalise nearly fatally. In heart-pounding fashion, Scalise’s minute-by-minute account tells not just his own harrowing story of barely surviving this horrific attack, but the stories of heroes who emerged in the seconds after the shooting began; in the minutes, hours, and days after he suffered a devastating gunshot wound, in order to save his life and the lives of his friends. Scalise delves into the backgrounds of each hero, seeking to understand how everyone wound up right where they needed to be, right when they needed to be there, and in possession of just the knowledge and experience they needed in order to save his life.

Scalise takes us through each miracle and each person who experienced it. He brings us the story of Representative Brad Wenstrup, an Army Reserve officer and surgeon whose experience serving in combat in Iraq prepared him to save Scalise’s life that day; of the members of his security detail who acted with nearly cinematic courage; of the police, paramedics, helicopter pilots and trauma team who came together to save his life. It tells, most importantly, of the citizens from all over America, who came together in ways big and small to help one grateful man, and whose prayers lifted Scalise up, during the worst of his hospitalization.

As we follow the gripping, heart pounding, and ultimately inspiring story, we begin to learn what Scalise was experiencing in real time; That Americans look out for each other; that there is far more uniting us than dividing us.