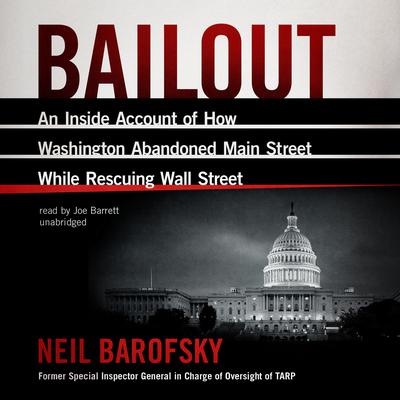 Bailout: An Inside Account of How Washington Abandoned Main Street While Rescuing Wall Street

One of the 2012 Kirkus Reviews’ Best Books for Nonfiction

An insider of both the Bush and Obama administrations offers an irrefutable indictment of the mishandling of the $700 billion Troubled Asset Relief Program bailouts and the extreme degree to which our government officials—from both parties—served the interests of Wall Street at the expense of the public.

From his first day on the job as the special inspector general in charge of overseeing the distribution of the bailout money, Neil Barofsky found that the officials at the Treasury Department in charge of the bailouts were in thrall to the interests of the big banks. In vivid behind-the-scenes detail he reveals how they steadfastly failed to hold the banks accountable even as they disregarded major job losses caused by the auto bailouts and refused to help struggling homeowners. He discloses how the team at the Treasury under Secretary Timothy Geithner worked with Wall Street executives to design programs that would have funneled vast amounts of taxpayer money to their firms and allowed them to game the markets and make huge profits with almost no risk and no accountability. Providing stark details about how—through a combination of sheer incompetence and a profound disregard of the plight of homeowners—the interests of the broader public were betrayed, he recounts how an increasingly aggressive war was waged by the Treasury against his efforts to raise the alarm about the failures.

Bailout is a riveting account of his plunge into the political meat grinder of Washington, as well as a vital revelation of just how captive to Wall Street our political system is and why the too-big-to-fail banks have only become bigger and more dangerous in the wake of the crisis.

“A searing account of his high-level experiences in the Bush and Obama administrations. Candid and hard-hitting, this book qualifies as an exceptionally informative insider’s account of what went wrong during the Great Recession rescue.” —Barnes & Noble, editorial review
“Barofsky's account contains enough self-deprecation that he does not come off as a holier-than-thou hero. A courageous, insightful book that offers no cause for optimism.” —Kirkus Reviews (starred review)

Neil Barofsky is currently a senior fellow at New York University School of Law. From December 2008 until March 2011, he served as the special inspector general in charge of oversight of the Troubled Asset Relief Program. Before that he was a federal prosecutor in the United States Attorney’s Office for the Southern District of New York. Bailout is his first book.