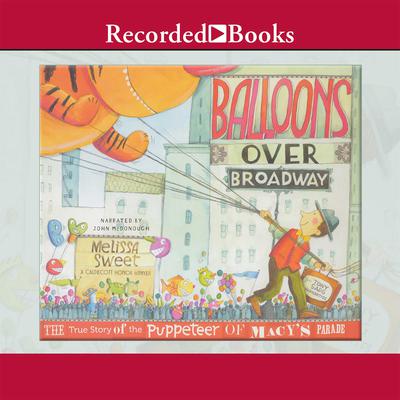 Balloons Over Broadway: The True Story of the Puppeteer of Macy's Parade

A Caldecott Honor Medal recipient and the illustrator of nearly 100 children's books, Melissa Sweet delivers the charming story of Tony Sarg, the man known as ''America's Puppet Master.'' With delightful, rhyming prose, Sweet takes listeners back to the 1920s to meet the designer who created the first helium-filled balloons for Macy's Thanksgiving Day Parade. Celebrating the fun and playfulness of Sarg's popular creations, Balloons Over Broadway brims with all the joy of one of America's most beloved traditions.

“A joyous piece of nonfiction that informs and delights in equal parts.” —Booklist (starred review)
“Sweet tells this slice of American history well, conveying both Sarg’s enthusiasm and joy in his work as well as the drama and excitement of the parade…This one should float off the shelves.” —School Library Journal (starred review)
“Tony Sarg, the man who invented the giant balloons of the Macy’s Thanksgiving Day Parade, has found a worthy biographer in Caldecott Honoree Sweet. The rush that comes from inspiration, the cliffhanger moments of creation, the sheer joy of building something and watching it delight the multitudes—Sweet captures it all in what is truly a story for all ages.” —Publishers Weekly (starred review)

Melissa Sweet has illustrated nearly one hundred children’s books, including board books, picture books, and nonfiction titles. Her collages and paintings have appeared in the New York Times and Martha Stewart Living, on Madison Park Greetings and Smilebox cards, and on a line of eeBoo toys. She received a Caldecott Honor Medal for A River of Words and has two New York Times Best Illustrated citations. She lives in Rockport, Maine, with her husband.