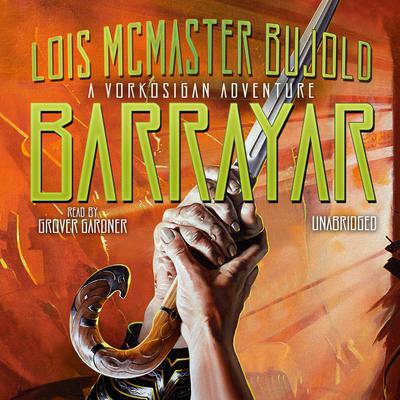 Winner of the 1992 Hugo Award for Best Novel

Winner of the 1992 Locus Award for Best Science Fiction Novel

Nominated for the 1992 Nebula Award for Best Novel

Political intrigue, culture clash and romance make a stirring mix in this award-winning follow-up novel to the acclaimed Shards of Honor.

In the wake of interplanetary war, former commander Cordelia Naismith has deserted her own planet to marry the leader of the defeated enemy, Aral Vorkosigan. On his home planet of Barrayar, two rival factions are eyeing the recently vacated throne, and Aral, recently appointed regent of Barrayar by the emperor on his deathbed, must stand between them. As Lord and Lady Vorkosigan, Aral and Cordelia struggle to establish stability in a fragile government thrown into confusion by the transition of power and the threat of civil war. When a palace coup endangers the government, their lives, and her unborn son, Cordelia takes action to secure the safety of her new family and new home.

“Narrator Grover Gardner offers a hearty reading that leaves listeners feeling satisfied but never stuffed. Gardner knows just how far to go while navigating the well-worn genre and never stoops to vain attempts to impress his audience. Ultimately, many sci-fi fans have heard it all, and this recording will bring them back down to earth with its simplicity.” —AudioFile
“Gardner uses changes in tone, pitch and delivery to clearly separate all speakers; but where he really excels is in bringing to the fore the emotional subtleties of dialogue…The result is a very satisfying narration of a terrific tale.” —SoundCommentary.com
“[A] superb and satisfying modern space opera...a seminal volume in one of SF's most popular series.” —SFReviews
“The Vorkosigan Saga is a classic work of space opera military sf that contains several books that are also marvelous sf romance. Shards and Barrayar could also be classified as military romance, while A Civil Campaign is a Regency romance set in this far-flung, intergalactic empire.” —Library Journal, praise for the series