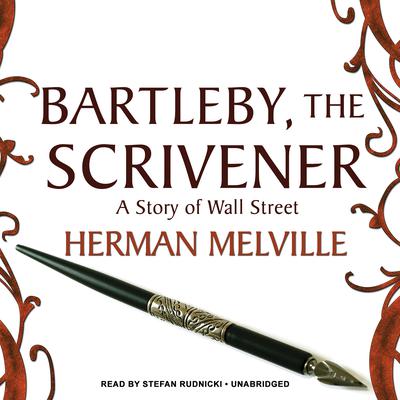 Bartleby, the Scrivener: A Story of Wall Street

Herman Melville’s tale of corporate discontent, Bartleby, the Scrivener, tells the story of a quiet, hardworking legal copyist who works in an office in the Wall Street area of New York City. The business where he works handles the official financial paperwork of wealthy men. One day, Bartleby’s employer requests he proofread one of the documents he has copied. Bartleby declines the assignment with the inscrutable “I would prefer not,” the first of what will become many refusals. The utterance of this remark sets off a confounding set of actions and behavior, making the unsettling character of Bartleby one of Melville’s most enigmatic and unforgettable creations.

“Stefan Rudnicki’s stately baritone embodies the story’s narrator, the stuffed-shirt Wall Street lawyer whose perplexed reaction to Bartleby is the substance of the story.”  —AudioFile