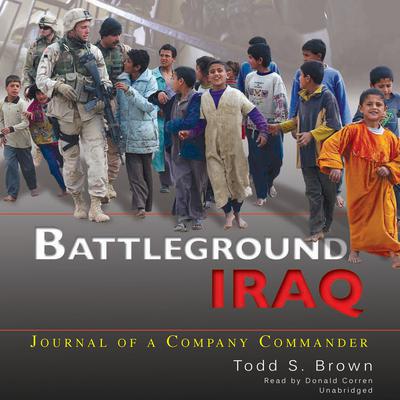 This gripping journal of a company commander from 2003 to early 2004, written in some of the most dangerous areas of post-Hussein Iraq, discusses tactics, techniques, and procedures as they evolved in the struggle to maintain order and rebuild the country. The journal tells of the dichotomy of combat operations versus nation building. It vividly captures the stresses of combat and corresponding emotions as they accumulate over time in a combat outfit. It reinforces the ideal of camaraderie among soldiers and deals with the emotional impact of losing friends in battle. Understanding these could prove invaluable to those who courageously serve our nation and will continue to endure them in this and future conflicts.

“Here is a book that tells it like it was…In general, what we see on TV or read about the war is written by journalists and is not the first-hand account of the soldiers who are over there. Captain Brown has done a fine job of recounting his participation in Iraq.” —Military magazine
“Reconstructed from letters…it captures the stresses of combat and gives the reader a sense of ‘you are there.’ The personal tone should appeal to both the general public and the historian.” —Library Journal
“Brown has done a great job logging his experiences as a company commander…It is not a cheerleader’s guide to our glorious victory. Neither is it the journal of someone who has turned against the concept of war…potentially useful for young people considering military service.” —LISNews

Todd S. Brown commanded an infantry company in the 4th Infantry Division (Mechanized) during Operation Iraqi Freedom and has served with the 1-508th Airborne Battalion Combat Team in Italy and 2-75th Rangers at Fort Lewis, Washington. He is a graduate of the United States Military Academy, where he served as First Captain—the highest ranking cadet. He is currently assigned as an associate professor at the United States Military Academy and has an MBA from Stanford University. He is married, an avid Ironman triathlete, and an Eagle Scout.