Beasts of the Frozen Sun

Burn brightly. Love fiercely. For all else is dust.

Every child of Glasnith learns the last words of Aillira, the god-gifted mortal whose doomed love affair sparked a war of gods and men, and Lira of clan Stone knows the story better than most. As a descendant of Aillira and god-gifted in her own right, she has the power to read people's souls, to see someone's true essence with only a touch of her hand.

When a golden-haired warrior washes up on the shores of her homeland—one of the fearful marauders from the land of the Frozen Sun—Lira helps the wounded man instead of turning him in. After reading his soul, she realizes Reyker is different than his brethren who attack the coasts of Glasnith. He confides in her that he's been cursed with what his people call battle-madness, forced to fight for the warlord known as the Dragon, a powerful tyrant determined to reignite the ancient war that Aillira started.

As Lira and Reyker form a bond forbidden by both their clans, the wrath of the Dragon falls upon them and all of Glasnith, and Lira finds herself facing the same tragic fate as her ancestor. The battle for Lira's life, for Reyker's soul, and for their peoples' freedom has only just begun …

“Narrators Alana Kerr Collins and Tim Campbell work hand in hand to weave an intricate tale of forbidden love and undying bravery…This expertly narrated audiobook, filled with toying gods and courageous humans, is a worthwhile listen.” —AudioFile
“Beasts of the Frozen Sun sweeps the reader into a lush and vivid world of magic and betrayal, crowned by a heroine who captivates from the first pages and a love story powerful enough to bring time to a standstill. An amazing debut.” —Erin Beaty, author of the Traitor’s Circle trilogy
“Beasts of the Frozen Sun is a fierce saga, beautifully told, that will transport readers to a time of magic and gods, battles and clan warfare. A totally engrossing and epic adventure—I couldn’t get enough of Lira and Reyker’s story.” —Jessica Leake, author of Beyond a Darkened Shore and Through the White Wood
“A fast-paced, epic tale, a brilliantly imagined world, unforgettable characters, and a wonderful love story—Beasts of the Frozen Sun is a great start to what should be a compelling new series.” —Juliet Marillier, award-winning fantasy author of the Blackthorn & Grim and Sevenwaters series
“This intense, action-packed start to a series offers star-crossed lovers against a brutal backdrop and violent tests of loyalty. Criswell’s world-building is particularly noteworthy, and the mythology and reality of Lira and Reyker’s world are captivating…Purchase for fans of Game of Thrones–inspired fantasy.” —School Library Journal
“High stakes and a whirlwind adventure…This book is full of forbidden love, a world on the brink of war, and incredible magic like the ability to read someone’s soul…A story you could lose yourself in.” —Hypable
“A knockout! The writing was spectacular…It was a fierce and dark tale about warring clans with a severe hatred of the unknown, a ballsy heroine who can read a man’s soul with one simple touch, and a brooding love interest forced to fight against his heart. It’s intense and addictive, and honestly I’m still reeling from that ending…but I cannot wait to get my hands on the sequel! This book deserves a 10 out of 10 and I urge you to pick this up, especially if you like historical fiction. It reminded me of The Remnant Chronicles by Mary E. Pearson, but with a savage, Viking edge.” —Nerd Daily 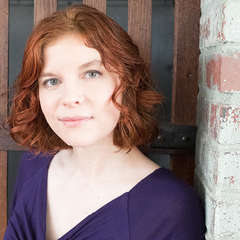 Jill Criswell is a writer of young adult historical fantasy. Born and raised in the swamps of northeastern Florida, she earned degrees in English and psychology and an MFA in creative writing from the University of Central Florida. Her greatest passion, besides reading and writing, is traveling the world; she’s visited fifty countries across six continents, falling in love with places like Iceland, Namibia, and Cambodia. She works as a university English teacher and lives in South Carolina, near the foothills of the Blue Ridge Mountains, with her husband and daughter (who is named after a volcano in Iceland). She is the author of Beasts of the Frozen Sun, the first book in the Frozen Sun Saga. For more information, visit JillCriswell.com.